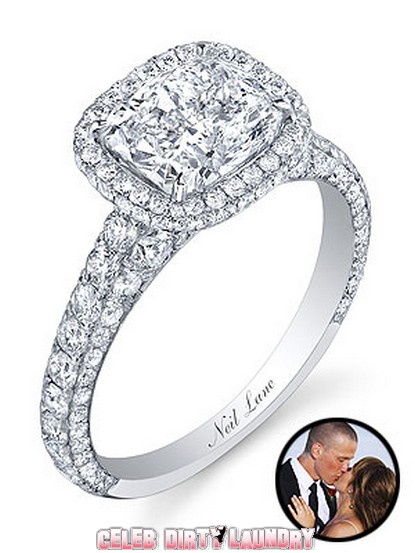 When J.P. Rosenbaum got down on one knee and popped the question to The Bachelorette star Ashley Hebert, he presented her with a fancy, beautiful Neil Lane engagement ring — valued at $60,000!

Ashley had shared with Neil, her ideas on the perfect engagement ring, over the internet, before they even met. He said, “Ashley had cut-outs from magazines and pictures she’d downloaded from the Internet of rings she’d dreamed about. I understood what her fantasy princess ring was all about. It had to be delicate but have a presence and she wanted a central stone with diamonds on the band – a ring with a romantic feel that sparkled.”

And it’s beautiful, isn’t it? Imagine getting an engagement ring that’s worth more than you were paid to do the show? I’d wait out the two years to keep that sucker, even if her relationship with J.P. doesn’t work out. Wouldn’t you?

The ring is 3.5 carats with a central cushion-cut diamond accented with 162 small, hand-set diamonds around a platinum band. Neil said, “It has a vintage, 19th century romantic feel, with soft edges, but with a contemporary look. Whichever way Ashley moves her finger, she sees sparkles.”

He added, “Once J.P. proposed and put the ring on her finger, they were inseparable. They were kissing, laughing, hugging, more hugging, more laughing, and they couldn’t stop looking at the ring – and at each other.”

How long do you think they will last? I’m curious.