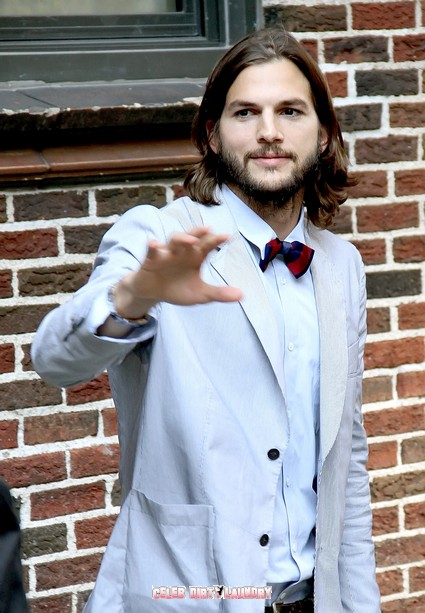 Ashton Kutcher is having a bad month – rumors of an impending split with his much older wife, Demi Moore, are all over the net – viewers hate the new ‘Two and a Half Men’ without Charlie Sheen – and now Ashton appears to have engaged in a conflict of interest that has CBS pissed off.

On the second episode of Two and a Half Men, the Kutcher years, his billionaire-Internet-entrepreneur character is lounging on the couch with his laptop, which happens to be plastered with stickers for social-networking and media websites like Foursquare, Flipboard and GroupMe.

But what appears to be a realistic scene for a Web master like Walden Schmidt just might be a little too realistic for CBS.

Since Ashton has financial stakes in those companies The Foursquare connection was noted by a disclaimer in the show’s credits, per FCC regulations.

CBS received no compensation for providing what amounted to a prime-time advertising slot for the Kutcher-affiliated websites.

“This was not part of any advertising transaction with CBS,” a network rep confirmed. “Our policy is to disclose such financial interests in a credit at the end of the broadcast.”

Word is that CBS is planning to blur out the stickers for all repeat viewings of the episode.