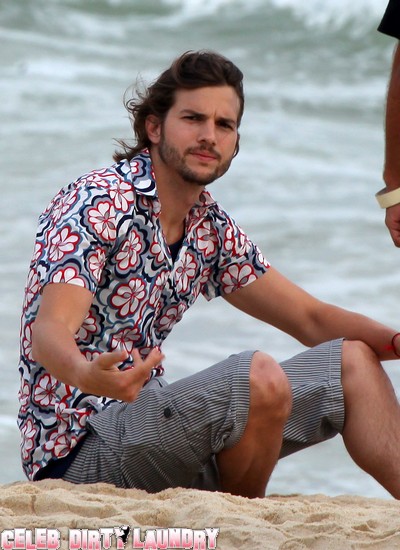 Ashton Kutcher had sex for “about two hours” with a blond receptionist on his wedding anniversary, and it wasn’t Demi Moore!

The ‘Two and a Half Men’ star – whose marriage to Demi Moore is on shaky ground was joined naked in the hot tub of his San Diego hotel room by 22-year-old Sara Leal and her friend Marta Borzuchowski and after Marta left, Sara claims she and Ashton had sex twice in the early hours of September 24.

Sara told The Sun newspaper: “We had sex twice. Everything felt natural. We were having a good time. One thing led to another. He was good but it wasn’t weird or perverted or creepy. I was attracted to him and he was attracted to me. He had great endurance. We were up for a while. It was about two hours.”

Sara met Ashton after joining some friends at a party in the suite next door to the actor’s in the Hard Rock Hotel. Most people eventually left, leaving the former ‘Punk’d star’, Sara and some of her friends alone drinking shots.

Ashton then invited them to his hot tub – and told the group he was “separated” from Demi.  Sara explained: “I wasn’t wearing anything. We took our clothes off right before we got in.”

“In the hot tub it was me and my friend Marta and Ashton and his friend. Later my other girlfriend, Alexis, joined us but she just put her feet in and didn’t take her clothes off. Ashton looked hot naked.”

“Alexis started asking all these random questions. She was like, ‘Aren’t you married?’ He said, ‘I’m separated.'”