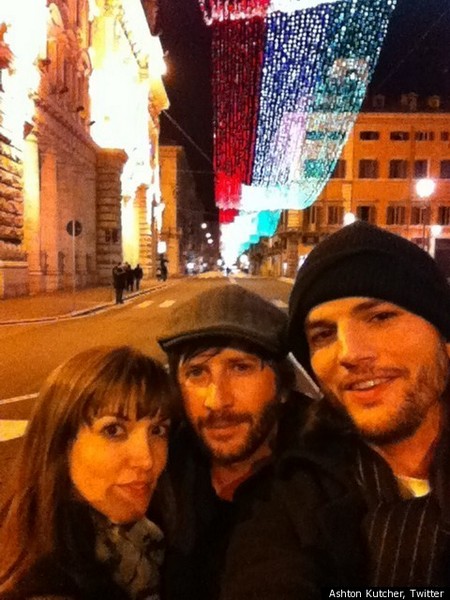 Ashton Kutcher is wasting no time getting back with the babes as the 33-year-old actor has been romancing screenwriter Lorene Scafaria.  Ashton and his wife, Demi Moore, split earlier this year after Sara Leal went public about her sexcapades with Ashton.  Christmas in Italy with Lorene seems to be just what Ashton needed to cheer himself up and the pair have reportedly been seen visiting numerous sights over the holidays, including the Leaning Tower of Pisa.

Witness to the affair, Alex Thorpe, told US Weekly the pair “held hands” during a romantic lunch at Pizzeria Trattoria Toscana in Pisa on Christmas Eve when they are said to have “shared spaghetti, and he paid.”  What a gentleman!

Ashton and Lorene have been travelling around the country in a Porsche Carrera Sports 2011 and stayed in a private dwelling.

The ‘Two and a Half Men’ star took to twitter to post a picture of the pair along with his business partner Matt Mazzant, and he wrote: “Roman holiday with homies…have an amazing new year!”
Knowing Demi she will need to make a public appearance with some stud just to show the world she is still game.  Hopefully it will be someone her own age this time.