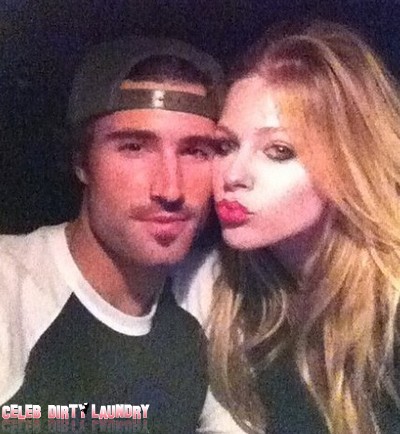 Going out drinking in bars always entails some risk – and Avril Lavigne and her man are battered and bruised after apparently being jumped by 5 people on Saturday night. Poor Avril has been left with a black eye and bloody nose after she and Brody Jenner were attacked by the group.

Avril was apparently enjoying an evening out with her boyfriend, ‘The Hills’ star and son of Kris Jenner, Brody, at the Roosevelt Hotel in Hollywood on Saturday night when the group turned on the couple, leaving her with a “f***ed” face.

Writing on her twitter page, Avril said: “I don’t fight. I don’t believe in it. To clear things up I got attacked by 5 people last night out of nowhere. Not cool. My face is f****d.”

“As in black eye, bloody nose, hair ripped out, scratches, bruises and cuts. So not ok to be abusive to others. Violence is NEVER the answer.”

Brody didn’t escape from the incident unhurt either and was discharged from hospital yesterday after allegedly being hit with a bottle.

He tweeted: “Interesting Saturday night… Just got of the hospital with a new scar on my face.”

Prior to the attack, Brody and Avril had been enjoying the “best night” ever, with the reality TV star – who is the step-brother of Kim Kardashian – admitting he was “so happy” with his girlfriend, who he has been dating since February 2010.

Brody wrote on his twitter page: “Having the best night with the love of my life @AvrilLavigne so happy right now!!”