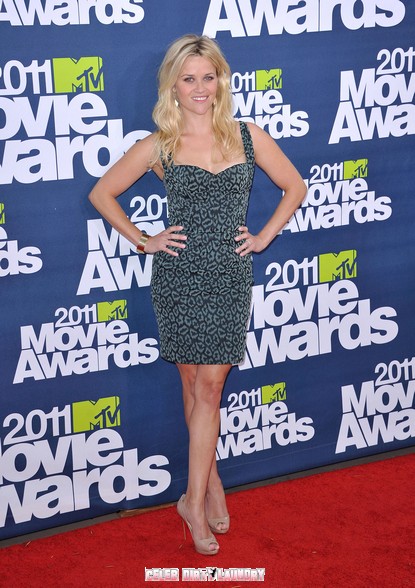 Is it just me, or is anyone else feeling a little awkward while watching the 2011 MTV Music Awards??  Aside from Reese Witherspoon nailing her acceptance speech after receiving the Generation Award, everything and everyone just made me feel embarrassed!

I love my Robbie, and it doesn’t take much at all to embarrass Kristen Stewart – but Robert Pattinson needs to brush up on his public speaking.  I refuse to talk ill of him, but you all know what I mean.  Rob, Patrick Dempsey, and Chelsea Handler all honored Reese, but Rob will surely be remembered more for fumbling over his jokes and punch lines – or lack there of.

Aside from the lack of laughs, shrieks from fans were still heard through my television. I suppose no matter what Rob sputters out, alas, he will always be loved.

No surprise from Kristen when she won the award for best female actress, she was shy and nervous as usual.  Totally expected, although I just wish for once she wouldn’t bury herself behind her hair and gain some confidence.  She looked absolutely stunning, however I wonder what the deal was with her sneakers?  Didn’t want to bail in heels I presume, but could she not have at least worn black kicks?  Maybe even throw on some safety pins to match her dress?

Host Jason Sudeikis has had some good and bad jabs at several actors’ expense – I’m glad that he stopped with the Arnold Schwarzenegger jokes.  One can only hear enough.  I loved the cast of Jackass popping up, their 3D movie was amazing, and I’m glad they weren’t left out.  Looking forward to seeing all the clothes and hearing some behind the scenes gossip!