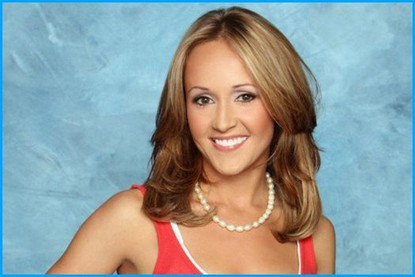 Can you believe it the new Bachelorette is here. Ashley Herbert will be looking for her one true love.  Now, Ashley will be in competition with no one, and get the chance to have nearly two dozen men compete for her affection.   Ashley was a contestant on last season’s The Bachelor, where she tried to get the attention of Brad Womack and failed.  She did make it to the final three.

The premiere of the show is tonight and we cannot wait the tears, the sobs, the man fights, the “Oh, I did not know it was going to be so hard.”  Our recap tonight is brought to you by Rosie over at Fit Fab Celeb she will be bringing it to you each week because she is an avid fan of The Bachelorette!

Chris introduces twenty five of the most eligible bachelors:

Chris sits down with Ashley and asks what she regrets the most about her last time on the show and she says it was her actions, wasting too much time and not getting to know Brad Womack enough – she would definitely do things differently. She is opened to find love, she just hopes she can this time and hopes the guys are on the show for the right reasons. Ashley tells Chris she has some drama, before the limo even arrives; contestant, Bentley has an ex-wife whose friend called Ashley and gave her an ear full. Yikes!

Time to meet the hunks…. Ryan P. is first our of the limo and tells Ashley ‘Brad’s loss is his gain’, Jon is up next and they share an awkward hug – he lifts her up and puts her over his shoulder ‘Can , Lucas gives her a hand shake and a hug, William is next and there is a quick hug, Mickey tries to give her a kiss from all the men in America and she backs away, Tim has an awkward moment then a hug, Ben C. gives her a little French to impress her then a hug and he’s off, Stephen gets a quick hug sneaks a kiss on the cheek, Chris D. tries some poetry for a first impression, West gets a quick hug and gives her a broken compass that is stuck on WEST, Anthony checks himself out first in the window then a quick hug and he’s off, Rob admits that he watched her previously on the Bachelor, Ames gives her ballet tickets, Matt gives her an endearing hug and cool handshake, Jeff arrives with a mask on his face?? (duh I don’t get it), Ben F. arrives with a bottle of wine and glasses for a toast, Frank kisses her hand and twirls her around, Michael tells Ashley that this is the first time he has ever been excited to see a Dentist, Chris M. shakes her hand – Oh Canada, Ryan M. snaps pictures of the two, J.P. gets a quick kiss and hug, Nick wrote her a poem that is very endearing and funny, Blake gets a quick hug, Bentley (the infamous divorcé) arrives and you can feel the tension, Constantine brings her some pink dental floss and ties a piece on her hand to remember him.

Ashley gets ready for the night of her life, before meeting the guys Chris reminds her that there is a First Impression rose to give out tonight. Ryan P. is the first to whisk Ashley away for some one on one, smart guy! Ben F. gets his alone time next, then on to another guys who calls his mom to speak to Ashley – who gives some motherly advice about the Fantasy Suite (getting a little far in the game), Ashley is speaking to a group of guys and another guy arrives with a guitar pretending to serenade her and once he gets her alone he throws the guitar in the pool. The guys are razzing Jeff, guy with the mask, asks him where Robin is and a lot of them are getting the creeps.

Chris arrives with the First Impression rose. Ben F. pops up behind a group of guys talking to Ashley with a big poster board to get her attention, he gets his valued alone time with Ashley and explains how he came about to speaking French. Ashley drops by on Tim who sitting by himself and is surprised to see her; he’s drunk and Ashley knows he is going to wake up tomorrow and have a lot of regrets. A lot of the men are not impressed with Tim, he insults Jeff who is wearing the mask and everyone things he should leave. A little while later Ashley goes looking for Tim and finds him passed out on a couch, she tries to wake him with no luck, the guy is out cold.

Ashley enlists a couple of guys to bring him out front and send him home, enough is enough. Jeff (masked crusader) finally gets his alone time with Ashley and explains why he is wearing the mask; nothing really matters on the outside and she realizes that he wants her to get to know the real him.

It’s finally time to some one on one with Bentley and Ashley gets right to it, asks him tell about himself. He admits to having a daughter and being divorced, but tells her he is in a healthy spot right now for a new relationship. Ashley is confused, he appears to be nothing like what his ex’s friend told her on the phone. Ashley gives out the First Impression rose to Ryan and he is tongue twisted with his acceptance. On the other hand, Bentley admits that he is not overly attracted to her, but he feels that he should have gotten the rose anyway, OMG what a loser!