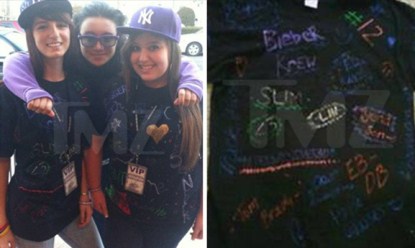 Four teenage girls at Roosevelt High School in Yonkers, NY went to the Justin Bieber concert where they wore t-shirts they designed themselves for the concert.  The t-shirts had Bieber Krew written all over them – like graffiti.  The next day the girls decided to wear the homemade t-shirts to school and claim they were asked to remove them because they were gang related and were also threatened with suspension.

The principal then called a meeting with the girls, their parents and the security guards. One of the parents tells TMZ the principal told them the t-shirts were “inappropriate for school because they were gang-related” and the girls would be suspended if they wore them again.

A rep for the school tells TMZ, “Students at Roosevelt High School were not banned from wearing shirts displaying the image of Justin Bieber, nor were they accused of being in a gang.”

Someone is not telling the truth here.  But, the school is well within its rights to ban the wearing of the t-shirt.  It’s not Justin Bieber, his music or what he represents that is outside of the school’s acceptable attire rather it’s the theme and style of the students presentation that breaks the rules.  It’s the attire that was made to be like those that are outside of what the school considers acceptable-it’s not the content it’s the form.