Barbara Walters Thinks The Kardashians Are Talentless And Untrustworthy 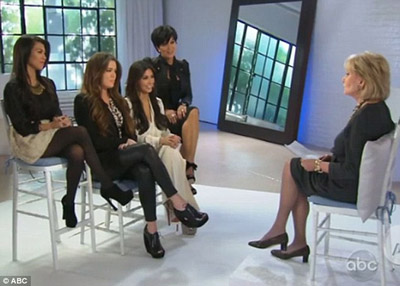 Like many in America (or at least Daniel Craig, Jonah Hill, and the innumerable people who have pledged to boycott the Kardashian family), Barbara Walters is not a fan of Kris Jenner‘s krazy klan.

After jointly picking Kim, Khloe, Kourtney, and Kris for her ABC special, The 10 Most Fascinating People Of 2011, Barbara didn’t mince words when she flatly told them during the interview, “You don’t really act; you don’t sing; you don’t dance. You don’t have any — forgive me — any talent!“

In defense, Khloe Kardashian explained that they “are still entertaining people,” before agreeing that none of them think that they can act or sing, (which must have been news to Kim Kardashian, who released this trash-tastic dance music video earlier this year.)

“I think it’s more of a challenge for you to go on a reality show and get people to fall in love with you for being you, so there is definitely a lot more pressure, I think for being famous for being ourselves,” said Kim.

Unfortunately for Barbara Walters, who conducted the interview in September 2011, weeks before Kim filed for divorce, Kourtney revealed she was pregnant, and Khloe announced that she was moving to Texas with her husband, Lamar Odom, Barbara wasn’t able to question them about any of those life-changing events, despite assurances from producers that nothing note-worthy would occur between the time they did the interview and the time the special aired. And that is something that seriously irked the 82-year-old journalist in retrospect.

“You cannot trust the Kardashians,” she recently told David Letterman during an appearance to promote the special.