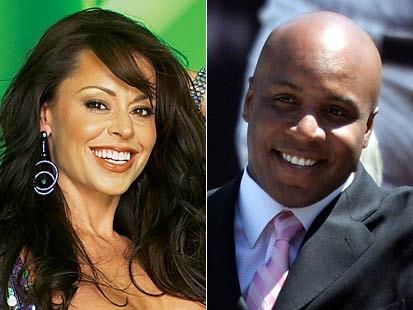 This week Barry Bond’s testicles were the topic of courtroom testimony as the steroid-taking slugger’s longtime mistress, Kimberly Bell, described Barry’s balls as shriveled and misshapen on the witness stand.   She also claimed the former Giants star’s steroid abuse caused a 1999 injury, made him sprout back acne, forced him to shave off excessive chest hair, destroyed his libido, and caused him to became ever more petulant as time went by.

Get this – Kimberley claims that Barry threatened to rip out her breast implants since “he paid for them.”

How will the slugger’s all-star team of defense attorneys counter such damning claims?  The strategy will be as old as the hills about as useful as tits on a bull or Barry’s shriveled testes – they will simply try to paint Kimberley as a gold-digging slut hoping to squeeze a final payday out of Bonds.

“If she’s believed, [the prosecution] has gone a long way to proving their case.  But the whole question is credibility,” he says. “If she is believed, this puts a nail in the coffin.  But that’s a big if.  She has some serious background problems.”

“The more dramatic, the more salacious her testimony, the more of a celebrity she becomes,” he says.

“This is a long shot. But it’ll probably be easier to find him guilty about lying about being injected than lying knowingly about steroids,” he says.  “So there could be a compromised verdict on that.  He’s guilty about injecting himself and lying about it, and not guilty or a hung jury on the steroids.”

Legally, that hypothetical outcome would be far better for Barry than the worst perjury scenario he faces.  But, in the court of public opinion he has already lost.  We KNOW he used steroids knowingly and in excess for years – he just liar and a cheat.