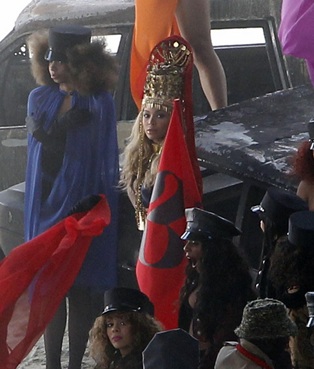 These days nothing is secret anymore. Paparazzi shots of Beyonce filming the video in the Mojave desert in California appeared online last week, showing the diva in an array of outfits, standing on overturned cars in a revolution-inspired scene.

Now her new song ‘Girls (Who Run the World),’ has leaked on line.  The song is the lead single from Beyonce yet to be announced forth solo studio album which was produced by Produced by Diplo and Switch.

Beyonce is beyond secretive and she is not very happy that the track has made it on-line.  Francis Lawrence, who is helming the video for ‘Girls,’ admitted as much about the leak of photos from the set. “She would probably have me shot if I said anything,” he told MTV. “Some stuff spilled out, but she wasn’t happy about it, so I’ve been sworn to secrecy.”

Give it a listen and let us know what you think of the song?