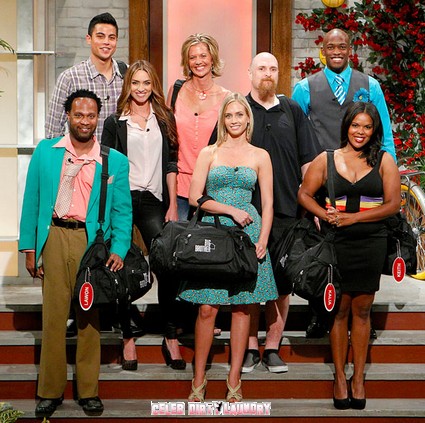 Welcome to our live blogging of the season Premiere of Big Brother!  Are you as excited as I am?  This will be the 13th season of Big Brother and the prize for the show is 1/2 million dollars so you know there is going to be a lot of drama, backstabbing and fighting going on!  The show tonight is being brought to you by Rosie over at Fit Fab Celeb – go visit her and send her some love.

The House guests come out and there are only eight of them.  They are not allowed to talk and Julie tells them to expect the unexpected.  The contestants this season are Kalia Booker, 30,  Porsche Briggs, 23, Dominic Briones, 25, Cassi Colvin, 26, Lawon Exum, 39, Keith Henderson, 32, Shelly Moore, 41.

Julie Chen lets the first four enter the house, Lewon, Dominic, Porsche and Shelly are first.   Adam, Cassi, Kalia and Keith are next in the house. Keith strikes me right off from the start as being a big character in the house. Kalia admits she has a hair phobia! Porsche thinks her best trait is her personality and the doctors helped a bit!  The house guests figure out that there are eight of them and twelve place settings at the table.   Adam reminds me of former BB winner, Evil Dick. The guests all introduce themselves and the lies begin!

Keith gets up and picks Porsche. Cassi and Shelly choose each other, then Adam approaches Dominic. Lawon eyes Kalia and gives here this creepy look (I feel sorry for her). The pairs are chosen.

The door bell rings and it’s Brachel; Brendon and Rachel.  The idiot and the tramp, great! The house guests look just as excited as I am to see them.

Another door bell, Jeff and Jordan arrive. This should be easy, these two are the dumbest players.   What could possibly be next, another door bell. Evil Dick and Danielle are in the house! OMG, this is going to be an awesome season.

Dick pulls some strategy out of his hat right from the beginning, he tells the house guests that he and Danielle have not spoken in three years. The house is already dividing into new house guests and past house guests. Time for the first HOH competition. This competition is called Going Bananas, each duo must hold on to their banana as long as possible. The last duo hanging on will win HOH.

Just to add a little excitement to the competition, BB adds some chocolate to the fun. Shelly is the first person down and they fall like dominoes. Whip cream gets shot in their faces and the last newbie, Porsche is still hanging on and then she falls. Rachel, Dick and Danielle are the last three on the banana and Rachel makes a deal. Dick jumps off, Danielle follows suit. Rachel wins HOH, no surprise that she could ride a banana the longest.

Another twist in the game is about to send shockwaves through the house. Julie Chen gathers everyone in the living room and she tells the house that being nominated will be blessing as well, anyone who survives eviction in the first four HOH’s will get a golden key and guarantee them a spot in the top ten.

Come back on Sunday night to see who Rachel nominates for eviction!