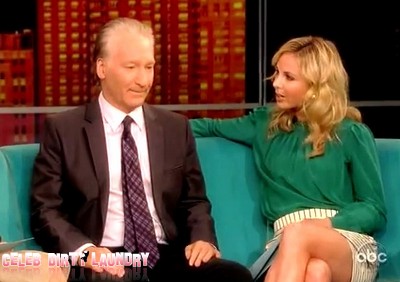 Bill Maher can handle verbal conflicts but the man seemed stymied today as Elisabeth Hasselbeck unloaded on him with both barrels on ‘The View’ today.  Heated exchanges aren’t uncommon on ‘The View’ because of the extreme range of political opinions held by the women who host the show.

But when you add Bill Maher to the mix, a man renowned for making controversial statements, you just know someone is going to walk away bleeding.

Bill and Elisabeth got into it big time when she questioned him about a joke he made at her expense, suggesting sending her to Egypt in exchange for a CBS news correspondent Lara Logan who had been assaulted.Logan and her CBS crew were arrested and detained for one night by the Egyptian Army on 3 February 2011, while covering the Egyptian Revolution.  She said the crew was blindfolded and handcuffed at gunpoint, and their driver beaten. They were advised to leave the country, but were later released.

On 15 February 2011, CBS News released a statement that Logan had been beaten and sexually assaulted on 11 February, while covering the celebrations in Tahrir Square following Hosni Mubarak’s resignation.  Logan said the incident involved 200–300 men and lasted around 25 minutes. She had been reporting the celebrations for an hour without incident when her camera battery failed.  One of the Egyptian CBS crew suggested they leave, telling her later he heard the crowd make inappropriate sexual comments about her.  She felt hands touching her, and can be heard shouting “stop”, just as the camera died.  One of the crowd shouted that she was an Israeli, a Jew, a claim that CBS said, though false, was a “match to gasoline.”  She went on to say that they tore off her clothes and, in her words, raped her with their hands, while taking photographs with their cellphones. They began pulling her body in different directions, pulling her hair so hard she said it seemed they were trying to tear off chunks of her scalp.  She was eventually saved by a group of women.  She was flown back to the U.S. the next day, where she spent four days in hospital.

Declaring that she didn’t find the remark to be funny, Elisabeth asked Bill, “Would you say that again?” to which he replied, “If I had a crystal ball and knew I was coming here and had to spend my whole segment talking about it, no.”