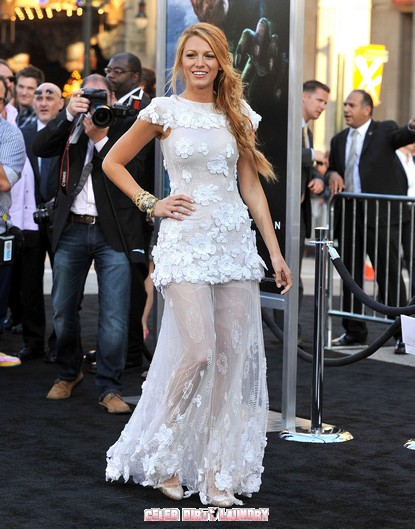 For a change, Blake Lively isn’t all over the headlines for her supposed nude pictures that were recently released online by hackers, or for her budding new relationship with one of my favorite main men, Leonardo Dicaprio.

Blake arrived at the premiere of her new film, The Green Lantern at Grauman’s Chinese Theater on Wednesday June 15, in Hollywood. Do you think it’s a coincidence that all this media attention coincides with her new film?   Hmmm..something to ponder.

Whatever media blitz the young star has been dealing with, the 23 year old looked absolutely fabulous in a Chanel Couture lace dress. She proudly posed for the cameras, smile and charm ready after coming straight from taping an appearance on The Tonight Show with Jay Leno.

All I know is, the gal looks fantastic and whatever drama ensuing in her life, she always knows how to turn heads.

Click on the thumbnails below to enlarge 9 more pics of Blake at the premiere!