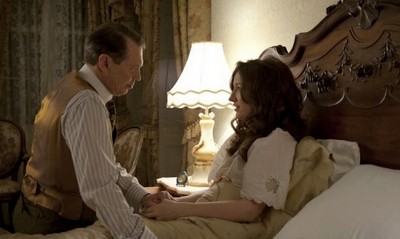 Tonight is the third episode of Boardwalk Empire called “A Dangerous Maid”.  On last week’s episode Nucky realizes he is losing Atlantic City and figures out who has betrayed him.  If you missed last night’s episode read our official recap here.

Official recap: Tonight’s episode opens up with Agent Nelson Van Alden having breakfast in the apartment he keeps for Lucy Danzinger during her pregnancy – she walks in and tells him the baby was kicking again. She is lonely and she wants to have dinner with the agents. Nelson tells her he pays her to keep people out. She is trying to deal with her loneliness but she tells Nelson Van Alden she cannot live like this. He tells her once the baby is born she won’t have to.

Over with Margaret and Nucky, Margaret still cares – LOTS – she tells Nucky that she is giving back her jewellery but she is still trying to help Nucky who she heard was invested to the limit and needs the dough. Nucky tells her to get her jewelery back that they will be fine. Margaret gets a letter from the Pinkerton Detective Agency.

Lolly Steinman‘s money for Nucky is short because he is not getting any liquor… he needs the liquor to give it to people for free so they gamble more. He has been getting the cheap stuff and people want the better stuff. If Lolly does not get better liquor and regularly he will go elsewhere.

The Commodore and Jimmy are trying to convince Mr. McCoy not to sell liquor to Nucky.

When Nucky gets to his place Al Copone is there.  Al is in Atlantic City to send a message from Johnny Torrio – the message is Chicago will not be buying alcohol from Atlantic City. Capone tells him it is not personal. He tells Nucky that they are now getting Alcohol from Jews from across the lake. Nucky tells Capone next time Mr. Torrio has something to tell him, then tell him in person himself. Capone asks how Jimmy is doing and Nucky tells him to ask him himself – implication clear that Jimmy and Nucky are on the outs.

Although over with Lucy Danzinger, she has a visit and she is upset because he is reminding her of what she is missing.

She says when Nucky threw her out she wanted to feel important and Van Alden offered her money and said he would take care of her. She wants her friend to tell her about Vaudeville.

Over with Jimmy and Richard Harrow he shows up home and Al Capone is there. Jimmy tells Capone they are taking back the city, they have the Coast Guard in there pocket and Nucky will soon be in jail.

Eli Thompson arrives home and there father is staying in bed and won’t get up. He has a newspaper and Nucky is in it and his father tells Eli that it is bullshit what they are doing to Nucky. His father wants to be ready to help Nucky and he tells Eli he needs to help his bother too.

Margaret is looking through the envelope she got from Pinkerton’s Detective Agency and it is dredging up painful memories for Margaret. She hides the letter from Nucky. Nucky tells her that Chalky is being released from prison.
He wants to know what is going on with Margaret. She tells Nucky her brother and sister are here from Ireland now and she shows him the pictures. He tells her when this is all over he wants to take her away, perhaps to Paris because it is important to always have something to look forward to.

Jimmy is getting a manicure from his mother and his wife does not look pleased. Mom tells Jimmy that is means everything that he stood up for her honor.

Over with Lucy and she is reading a script and Van Alden shows up and wants to know what she is doing. She gives the script to him and she tells him her friend came over today and gave it to her. He wants to know what they discussed. She tells him there is a part that she would be perfect for. Van Alden reads the script and wants to know if she wishes to appear in the spectacle and she tells him she wants to because if she does not do something she is going to go crazy. He tells her what she wants cannot be allowed because she has a sacred charge and he is paying her.

Damien is telling Nucky that they have to provide liquor to the casinos or they will lose them. The phone rings and it is the Attorney General Harry Daugherty and Nucky is telling him he needs to call in a favour and wants him to step in and help in. Harry tells him there is not much he can do and Nucky is not pleased.

Over with Myer Lansky he is being told a card game he is holding is being held in a territory that Mr. Masserati owns. That want to find a compromise. They are also not happy about the two men who were killed. They offer them 10% and they agree for now.

Van Alden is finding out about another Speakeasy from Mr. Doyle and Van Alden pays him.

Lucy Danzinger is naked and looking at herself pregnant in the mirror and crying.

Margaret is making one of the members of her household staff call looking for Peggy Rowland. The maid is told Peggy is dead and she a died 12 years ago.

Nucky has been invited to join the Mayor for dinner.  Owen stops by and he tells Nucky he is there because he reads the paper and he thinks he can help because of his talents which are making people stop doing what you don’t want them to do.  This is very significant as Owen is a natural to replace the traitorous Darmody.

The butler comes in and tells Nucky the Coast Guard is seizing the ships with his liquor on it.  The Commodore has used his contacts to convince the Coast Guard to do it.

Lucy Danzinger is standing at the top of the stairs and considering throwing herself down to induce miscarriage and free her from Van Alden.  Then just as she is deciding she receives a delivery which is a record player sent by Van Alden.

Margaret comes down and catches the household staff and Katy gossiping and sits down with them to have a drink.  She drops her pretense with them and tells them to call her Margaret she does not want to put on airs.

Nucky comes in and asks what is happening and wants her to dress for dinner because he is taking her out.

Van Alden gets back to Lucy Danzinger’s apartment and she is dancing and clearly a lot happier.

Jimmy and The Commodore are having dinner at Babette’s with the governor…  Who walks in but Nucky with his wife and the Mayor.

The governor asks if Jimmy is walking in his father’s footsteps and Jimmy tells him he is his own man.

Nucky is staring down the The Commodore and gets up walks over to him takes his plate and throws it.  He tells The Commodore he has had his last meal in the restaurant and he wishes the Governor a long political career.  Nucky promises them all he will destroy them if they persist against him.  Nucky reminds Jimmy of what a bastard the Commodore was – didn’t even ask Jimmy’s mom’s name when he selected her as his prostitute.  Nucky want’s Jimmy to wise up and not trust the Commodore.  He wishes them a nice dinner and walks away.

Over to Owen and he is protecting Nucky’s interests by stopping The Commodore’s men who are trying to sell liquor.

Jimmy is at home drinking and he is upset.  Clearly he is thinking about what Nucky said about his father.

Nucky and Margaret return home and he tells Margaret he never wants to see her sad again.  Katy asks Margaret if she is is Kelly Rowland and Margaret dismisses her.

That is it for this week.  Let us know what you thought of the show?  Sound out in the comments below!