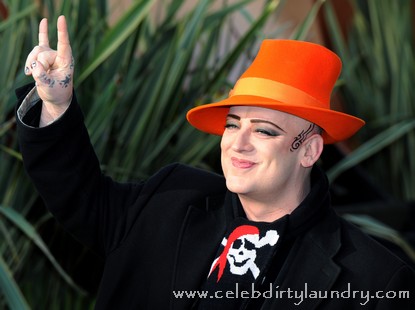 George Alan O’Dowd, or Boy George as he is much better known has pledged to “out-GaGa” Lady GaGa with his planned pop music comeback.  Boy George suggested to Gaydar Radio that he would reunite his 1980s group Culture Club.

George said: “Next year would be our 30-year anniversary and I just think it’s a great opportunity to do something really fun and we’re going to do a mental show.  The drag’s back and the stuff that influenced me from the ’70s.  All of that.  We’re going to out-GaGa GaGa.”

George added: “We’re looking at doing a record. I’m not sure if it will be a covers album but that could be quite cool. There is talk of maybe writing some stuff with Mark Ronson or maybe him writing some stuff. Whatever, we’ll see. We have talked about it.”

In reference to his difficult period that included drug consumption and dealing as well as  multiple arrests he said: “There’s a lot of work to be done. Lots of things to do. I look at the period when I was on drugs as such a waste of time. I did nothing.”

Apparently George is happier now that he has recovered from his addictions: “I’ve done so much in the three years that I’ve been sober. Although I went to prison, I’ve done so much and achieved so much. It’s a better place to be.”