Brad Pitt And Angelina Jolie Sued By Secretary They Fired 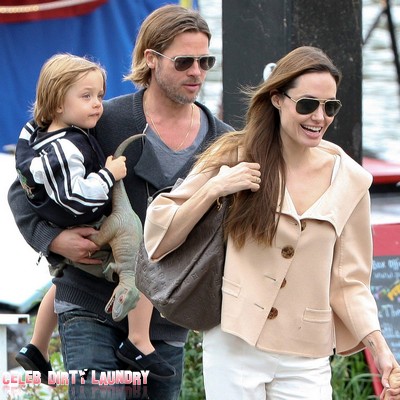 Brad Pitt and especially Angelina Jolie are always crowing about their ‘humanitarian’ efforts – but the couple heartlessly sacked a poor secretary, Ana Charlotiaux. And why did the multimillionaire couple fire the secretary from their palatial estate in France – because she was sick and took some time off work.

Ms. Charlotiaux, 45, is suing the management of the Hollywood stars’ $35 million country estate in the south of France, where she worked until February last year. Ms. Charlotiaux was hired to deal with telephone and email enquiries at Chateau Miraval, near Brignoles, in the Var-Provence region, in 2008.

Emmanuel Ludot, the lawyer for Ms. Charlotiaux pled ‘unfair dismissal’ before a panel of Prud’hommes – so called ‘Wise Men’ who rule on employment disputes in France – and asked that Ms. Charlotiaux receive about $80,000 in compensation.

“She is not asking for much – just fair compensation for wrongful dismissal,” said Mr Ludot at the hearing.

“This money is a drop in the ocean for these stars. She has nothing against them personally, and says she was always treated well by them, but they did not step in to prevent her being dismissed.”

“Mr Brad Pitt, who is also famous for his charity work and adoption of children, should understand that my client should be compensated as soon as possible. We hope they will both be faithful to their reputation for humanitarian causes.”

On Tuesday, Mr Ludot said his client had taken around four-and-a-half months off over two years because of illness, and that work on the estate – which includes a working vineyard – had not been disrupted, or lost any money because of her absences.

But Beranger Boudignon, representing the estate, said the demands were ‘unfair and unfounded’ and demanded compensation of 5,000 euros for his work on the case.

He said that Ms. Charlotiaux, who started her claim when Pitt and Jolie were attending the Cannes Film Festival on the French Riviera in May, was solely interested in making money.

Pitt and Jolie bought the 17th Century Chateau Miraval and its 400 acres in 2008, and spend a large part of the summer there with their five young children, three of whom are adopted.

The Prud’Hommes tribunal will deliver its verdict on Ms. Charlotiaux’s unfair dismissal case on February 7th, 2012.