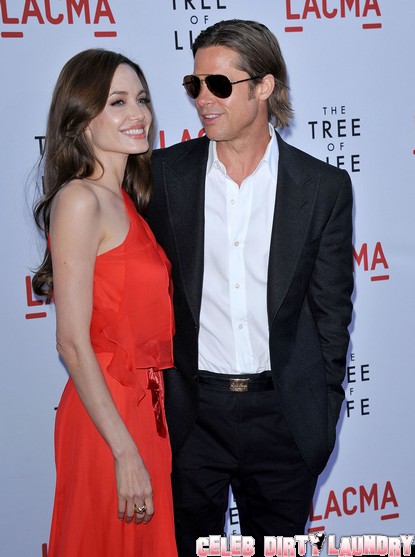 Brad Pitt, 47, and Angelina Jolie, 35, pictured above at the Los Angeles premiere of ‘The Tree Of Life’ have stated that they won’t consider getting married until “everyone else in the country who wants to be married is legally able to.” However, Brad Pitt recently revealed he is thinking of getting married for the kids.  Brad Pitt who is currently starring in The Tree of Life sat down with  USA Weekend and spoke about marrying Angelina Jolie who he has been with since 2005.  Brad and Angelina have six children, adopted Maddox, nine, Pax, seven, and Zahara, six, and have biological kids Shiloh, five, and twins Knox and Vivenne, two.

He said, “The kids ask about marriage. It’s meaning more and more to them so it’s something that we’ve got to look at.” Brad said he feels marrying Angelina is the next natural step for his family.  Because Brad and Angelina travel so much from set to set and country to country he call his family  “…pretty nomadic.”

In his upcoming film, the Tree of Life which received a standing ovation at its premiere at the Cannes Film Festival Brad plays a disciplinarian, sometimes abusive, father of three boys in the 1950s in Texas.

Click on the thumbnails below to see 9 more pics of Brad and Angie at the LA premiere!