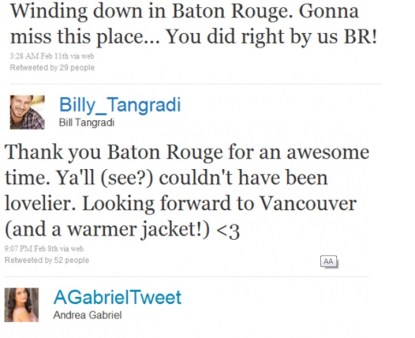 Filming is coming to an end in Baton Rouge for Breaking Dawn Part 1 and Part 2 and the cast is getting ready to move to Vancouver.  Breaking Dawn cast members Bill Tangradi who plays Randall a nomatic vampire and Andrea Gabriel who plays Kebi a vampire from the Egyptian Coven recently tweeted that their time in Baton Rouge is done.

Meanwhile Robert Pattinson, Kristen Stewart, Taylor Lautner and the rest of the gang are heading to Vancouver in the next week.  They will only be shooting in the city of Vancouver on one day … Mar. 14, they’ll be at a theater for part of the day and then they’ll be filming on Beatty Street.

Breaking Dawn will be filming in British Columbia from February 21st to April 13th – but in many locations.  Any twi-hards heading down to Canada for the filming.  Send us your pics and tips and we will be glad to post them!