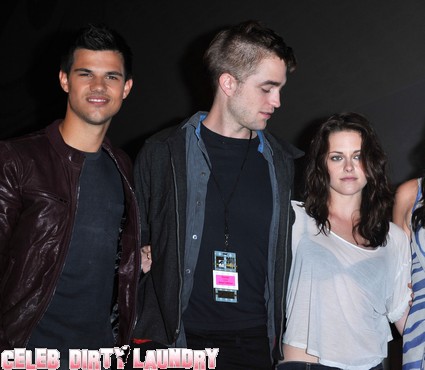 Hold on to your socks Twilight fans, Breaking Dawn Part 1 has itself a premiere date!!  The world premiere for the highly anticipated Twilight franchise will be at the Nokia Theatre in L.A. You know what this means? Breaking Dawn press time!! Fans will get to see their favorite lovebirds side by side again, as no doubt both Kristen Stewart and Robert Pattinson have been busy with several separate projects.

While Rob has been seen several times in L.A at a recording studio and spending time with good buddy (and fellow actor) Andrew Garfield, Kristen has been filming Snow White and the Huntsman in London (where, coincidentally Rob is from).

With the summer days almost over, time is flying by fast and before you know it, November will be right around the corner. So do you think Rob and Kristen is still going strong despite their long separation? Or, after photos surfaced of Kristen’s dad walking her and Rob’s dog in L.A – might that mean Rob is out of town perhaps visiting his lucky lady? Just something for all you romantics out there to ponder.