Breaking Dawn Renesmee Has Made An Impact on Rest of Cast 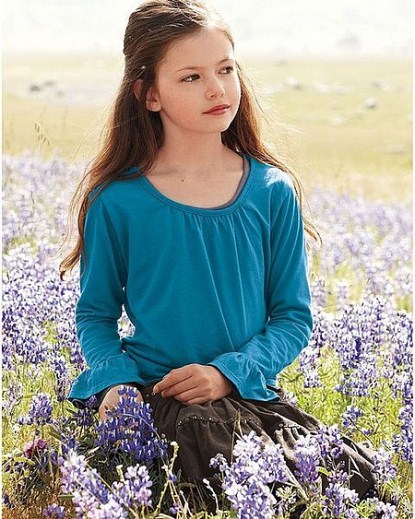 Young actress Mackenzie Foy, 10, who plays Renesmee, Robert Pattinson and Kristen Stewart’s daughter in The Twilight Saga: Breaking Dawn has made an great impression on the cast.  Elizabeth Reaser who plays her grandmother, Esme Cullen in Breaking Dawn was at The Sundance Film Festival and was doing some dishing about working with MacKenzie and had nothing but good things to say about her.

Elizabeth said: “She’s wonderful, and she lives across the hall from me in Baton Rouge, and she’s a wonderful, great actress.  She never complains about anything. She’s so professional about everything.  She’s such a sweetheart.”

She went on to talk about Mackenzie’s resemblance to Robert and Kristen and how she was the perfect choice:

“I think it was really well cast between Rob and Kristen. She could be their kid, you know? She looks like that,” Reaser said, laughing about the fact that Foy, who is 25 years younger than her, is playing her grandchild. “This is far too quick!”

Are you as excited as I am to see Mackenzie in the movie?  Do you think she was a good choice for Robert and Kristen’s daughter?