Britney Spears Given Permission To Become Engaged To Jason Trawick 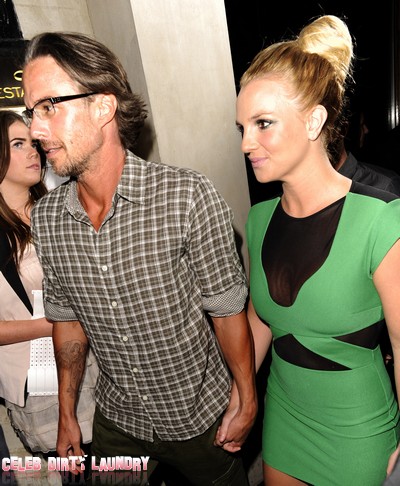 Britney Spears is still under her father, Jamie Spears‘, conservatorship but the legal child is apparently planning to get engaged to Jason Trawick by year’s end – how lovely, a Christmas engagement for the singing robot. Jason must be passing his mandatory drug tests if Britney’s owners/controllers are allowing him near the money-making wacko.

Jason has been dating Britney for around two years and plans to whisk her away on holiday when her ‘Femme Fatale Tour’ ends in Puerto Rico on December 10, and he is “very likely” to pop the question. Does Britney need her dad there during the proposal?

A Spears family insider said: “Britney and Jason discuss marriage all the time. Britney is truly in love with Jason, and well, Jason has loved her for a very, very long time.”

“Jason adores her two sons, Sean Preston and Jayden James. Jason is planning on taking Britney on a secluded getaway once the tour wraps, and it’s very likely he will pop the question at that time.”

The 29-year-old singer – who has been married twice before, to Kevin Federline, the father of her kids, and Jason Alexander – would need a judge to formally sign off her marriage as she is still under her father Jamie’s conservatorship following her much-publicized breakdown more than three years ago.

But apparently she is allowed to become engaged without requiring any legal approval since engagement is informal and not recognized under the law.

The source added: “When Britney does get engaged, her father’s attorneys will notify the judge in her conservatorship case. It’s extremely within the realm of possibility that the conservatorship will end, and then Britney will get married. It will be a very smooth transition.”

Supposedly Britney’s mom, Lynne, likes Jason and her family are “looking forward to the day that Jason will formally be a member of their family.” Of course – they need someone else to take care of Britney.

Once Britney is actually legally free and regains the rights and privileges of an adult what will she do?