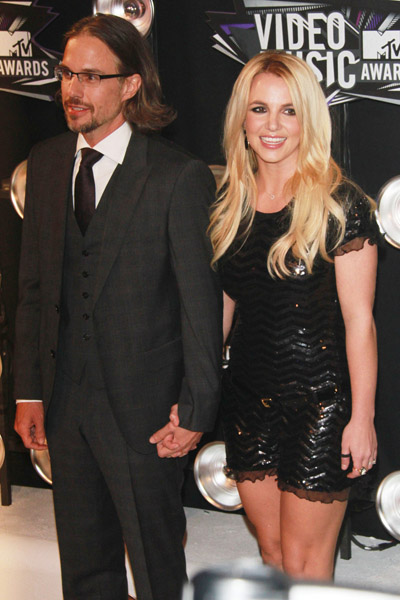 Jason Trawick may be ready to pop the question to his pop icon girlfriend this holiday season, but if RadarOnline is to be believed, it looks like it might just be a very long engagement for Jason and Britney Spears.

Reportedly, Jason, who recently turned 40, has been “everywhere from Harry Winston to Tiffany,” looking for a “classy” ring to ask Britney, 30, to marry him with but won’t be able to actually marry the single mom until the numerous lawsuits against her estate are settled.

Not only is Britney being sued by her former manager Sam Lufti (who claims that Britney’s parents defamed and slandered him) as well as by business associates over her Elizabeth Arden perfume, but according to TMZ, a new lawsuit was just brought against her this week from her former security company! (And this suit is separate from the sexual harassment one filed against last year by an ex-bodyguard, if you can believe that.)

“Lawyers for Britney’s conservatorship have been successful in keeping her from being deposed in the Lutfi litigation, and the lawsuit involving her Elizabeth Arden fragrance,” said a source to RadarOnline.

“Everyone involved wants Britney to get married once the conservatorship has been lifted. She could get married under the conservatorship, but the judge would have to sign off on it. If that were to happen, lawyers repping Lutfi would absolutely go into court and argue that if Britney were able to get married, she should be able to be deposed. There is no way Team Spears is going to let that happen. It will likely be a long engagement, which is fine with Britney and Jason. They are 100% solid and very much in love,” the insider added.

So, it doesn’t look like Jason and Britney will be getting married anytime soon, but, perhaps, it will give Brit Brit some much-needed time to plan her third wedding, which we’re hoping will be a classier shindig than her trashy, tracksuit and chicken wing-themed wedding to Kevin Federline or her quickie Vegas elopement to childhood friend Jason Alexander in 2004.