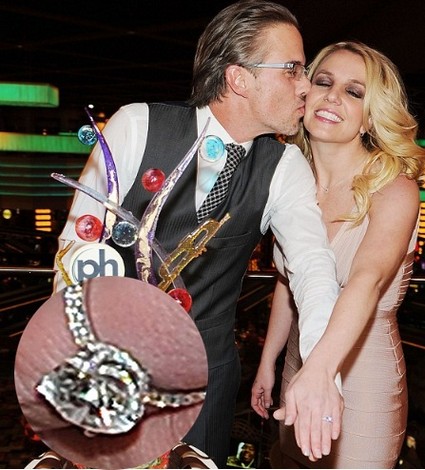 Britney Spears, 30, showed off her three carat Neil Lane diamond ring as she posed with her new fiancé Jason Trawick at the Planet Hollywood Resort and Casino in Las Vegas.  Britney is “still glowing” after she got engaged to boyfriend Jason.

Britney agreed to marry her agent boyfriend on Thursday night (15.12.22) and has been celebrating the announcement with a number of parties in Las Vegas.  She wrote on twitter: “Still glowing! About to jump on a plane to Planet Hollywood in Vegas. Throwing a Bday Party for Jason at Chateau Night Club. So fun. XXoo(sic)”

The singer – who has been married twice before, firstly for 55 hours to childhood friend Jason Alexander and for two years to dancer Kevin Federline – also changed her relationship status on social networking site Facebook from “in a relationship” to “engaged”.

Jason asked permission from Britney’s father Jamie before he got down on one knee, and the pair are now excited to continue their life together.

A source said: “This is something they’ve both wanted for a long time. It’s a way to cement their family. They’re both extremely happy and can’t wait to become man and wife.”

Congrats to Britney and Jason!