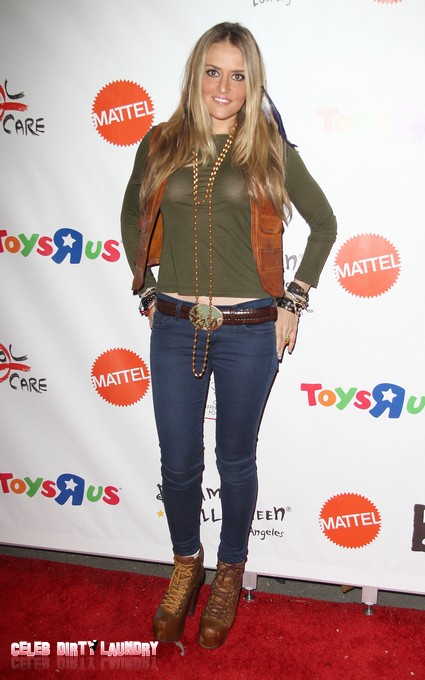 Charlie Sheen‘s ex-wife, Brooke Mueller, was busted for cocaine possession last night in Aspen, Colorado – so we can assume that her multiple stints in rehab have not been a roaring success for her. The mother of Sheen’s twin boys, Bob and Max, was also booked on a 3rd degree assault charge – must have been one wild night.

Aspen is not a lucky place for Mueller – on December 25, 2009, Sheen was arrested at their house in Aspen for assaulting her. Sheen was charged with felony menacing, as well as third-degree assault and criminal mischief.

TMZ broke the news:  Brooke Mueller was arrested last night in Aspen, Colorado on suspicion of cocaine possession. Details surrounding the arrest are unclear — but law enforcement sources tell us, Charlie Sheen’s ex was also booked on a 3rd degree assault charge.  Brooke was released from the Pitkin County jail this morning.

We recall in July that Mueller had planned on going to Mexico to get treatment with the controversial drug Ibogaine – but she never made it there. Ibogaine is designed to stop cravings for cocaine but it is classified as a hallucinogen and it’s illegal in the U.S.

Brooke had supposedly tried to get to Mexico twice – the first time she managed to get into a fight with an United Airlines flight attendant and exited the plane before it left the gate – the second time she somehow forget her passport… obviously she didn’t want to go.
Sources close to Mueller said: “She was convinced that was a sign to not go to Mexico. Brooke was aware that Ibogaine is a very dangerous drug to take, and could potentially do more harm than good for her.”

She eventually checked into a domestic rehab, leaving her twins with their granny.

The fact that Brooke Mueller has not lost custody of her children is an example of the two-tiered justice system we have – one for the rich and one for the rest of us.