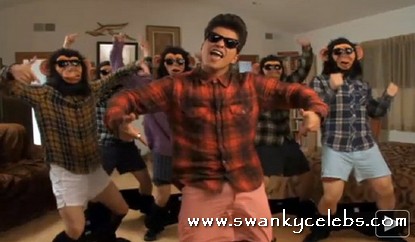 Today Bruno Mars released his music video for “The Lazy Song”.   This song is basically about how the singer doesn’t want to do anything except sit around and be lazy.  We see this concept executed in the simplistic video. The plot for the video is simple, but random and also somewhat entertaining.   There are five guys wearing monkey masks that are in the background of Bruno who serve as a comedic element. The characters are all in a normal room of a house and do a few simple, choreographed head bops and motions. The video’s 3:19 length is surprisingly well filled with this simple concept and remains interesting throughout. There is also a little guest appearance by Philip Lawrence (I met him once, nice guy), who served as Bruno Mars’ backup singer on his “Doo-wops and Hooligans Tour”, as well as a companion to Mars. Lawrence often also song writes and produces alongside Mars. Hopefully “The Lazy Song” will replace “Grenade” on the radio, since they seem to play it once every hour.