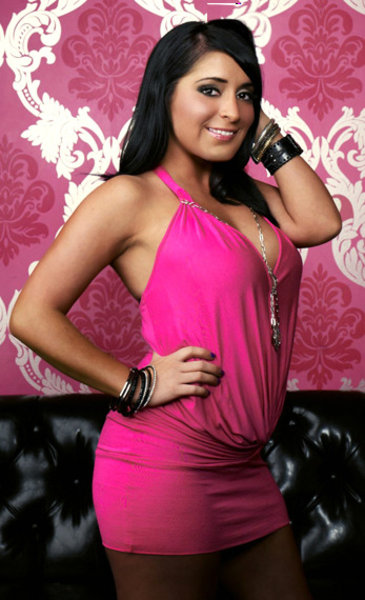 Angelina Pivarnick has told sources that her co-star on ‘Jersey Shore,’ Vinny Guadagnino “is a bully and a hypocrite.’

Angelina said she was the victim of endless verbal abuse and suggests Vinny was one of the cast’s ringleaders.

An example below shows the entire Guadagnino family, assembled for Vinny’s birthday, making fun of Angelina’s rap song.  I think they are just jealous – I mean does that family look like they have any reason to make fun of Angelina’s attempts to succeed in show business?

Angelina said that she ran into Vinny’s mother at a Staten Island department store after the video was released on utube and confronted her about her son’s cruel behaviour. “I explained how hurt I was by the way he treated me but she didn’t seem to get it,” she said, adding “Vinny’s mother is in such denial about how cocky and mean he is, she believes he is a quiet, nice boy that keeps to himself.”

To add insult to injury, Vinny revealed a t-shirt line that is supposed to represent the anti-bullying craze – the t-shirts have the clever slogan ‘F*** Bullies.’

But wait – there was a fancy reception to kick off Vinny’s anti-bullying t-shirt line and Vinny had Angelin’s invitation revoked!
‘How dare he do this after what he did to me!’ was all that the shocked Angelina could say.