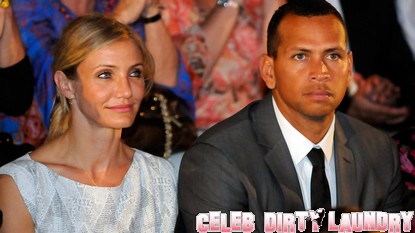 And we were so worried!  Rest assured – as of right this second – Cameron Diaz and Alex Rodriguez are still together.  Maybe check back with me though in about 10 minutes?

The amount of times I’ve read about these two breaking up is ridiculous.  I actually thought that the rumors circulating over the last few days were true, and that the two had finally called it quits.  Something along the lines that I ready vaguely sounded like, ‘A-Rod dumped Cam to focus on his career’.  A small part of me actually believed it.

Well that certainly wasn’t the case after last night’s 2011 MTV Awards, where Cam and A-Rod were spotted at L.A’s SoHo House’s after party.  Following the awards show, the two walked in hand in hand.  Not the likely signs of a couple that just called it quits?  Not to mention the fact they were spotted out together Thursday at a bar in L.A called Goal, where they watched the NBA finals.

Cameron Diaz Talks About Women She Has The Hots For!

Other celebrities among attendance after the awards show were Robert Pattinson and ‘galpal’ Kristen Stewart.  Lucky devils!  So what do you think, are they back together? Again?  I guess we’ll find out soon enough…or not?