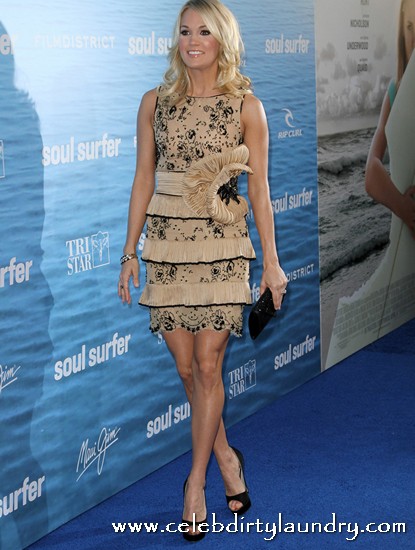 Carrie Underwood, 28, is having a great time being married to Nashville Predators hockey player Mike Fisher, 30, and does not want to have children anytime soon.  Carrie just wants to enjoy being married for a while.   She also does not want to be stressed out by rumors that she is pregnant until she actually is.

Carrie says she has a foolproof way to avoid the paparazzi speculating that she is pregnant.  “[I] choose my wardrobe differently because when I wear something a little baggier, I’m like, nope, people are going to think I’m hiding something, so I better not wear that,” she explains. “So it does make me kind of think a little extra.”

Meanwhile, Carrie is currently promoting her debut film Soul Surfer in L.A and is pictured above at the premiere in LA Held At the ArcLight Cinerama Dome Hollywood.  Carrie plays plays youth counselor Sarah Hill in the movie which is the true story of teen surfer Bethany Hamilton who had her arm bitten off by a shark while surfing in 2003.