Casey Anthony Starts Training For Her Next Job 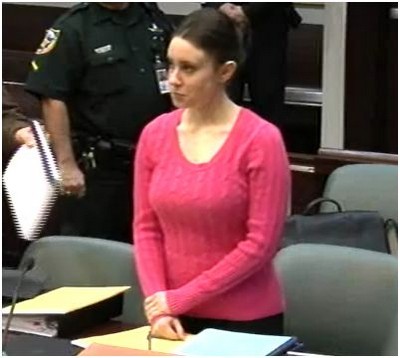 Casey Anthony was found ‘not guilty’ of murdering her little daughter, Caylee, but she was found guilty of check fraud in an earlier case. For this Casey received probation which required murder mom to either get a job or start taking classes. Since a job would exposure the likely murderer to a possible revenge attack she naturally opted to take classes – and to take them online. Casey does not want to expose herself since she would be bombarded by media and at risk from vigilante justice seekers.

You’ll all be pleased to know that Casey has decided to study Spanish online and through a private organization that will attempt to keep all of her records and info sealed away from prying eyes. Sources say that Casey already speaks some Spanish and had been teaching Caylee some words before whatever happened, happened.

TMZ broke the news: Casey Anthony has finally enrolled in classes, as her probation requires, and TMZ has learned her course of choice … Spanish.  Anthony is required under the terms of her probation to either get a job or go to school. Sources close to C.A. tell TMZ … she chose to study Spanish because she felt it would come in handy when she goes back to work in Florida.

We’re told Casey is taking the classes online, but not though a traditional online college, because of security issues. According to our sources, Anthony is studying through a private organization … which means her records will be kept under wraps.

Casey’s story reminds me in some ways of the movie ‘The Assassination of Jesse James by the Coward Robert Ford.’ After murdering James, Ford becomes famous, reenacting the shooting on stage – but his facing down the label “coward.” Ford was shot dead by a vigilante seeking to punish the coward in 1892 – 10 years after the murder.