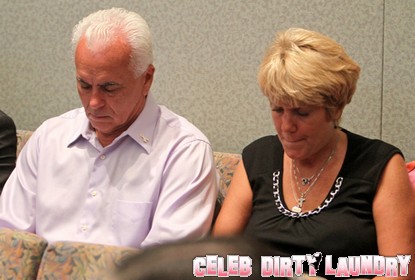 Not only do the networks think that Casey Anthony’s story is their cash cow, but they’re also chasing down her parents for an interview. Reportedly, George and Cindy Anthony were offered a cool $250,000 to give an interview about their granddaughter, Caylee’s death. But — they’re not having it! A quarter of a million bucks isn’t enough?!??

The apple doesn’t fall too far from the tree, does it?

Casey’s interview offer was said to be $1.5 million, so we’re betting that her parents want the same figure to dish the dirt. TMZ reports that George and Cindy were so miffed at the offer that they laughed it off. Wow, really?!?

ABC, NBC and CBS were all in the running, fighting over Casey’s first post-jail interview. They weren’t necessarily paying her for the interview itself. They’ve said that they’re basically paying her to license photos and videos from her. However, ABC News says that they won’t be doing that any longer.

So perhaps they’re out of the game now? Casey isn’t going to dish the details of anything that went on in an interview that doesn’t have a price tag attached to it.

As long as it’s not some puff piece, it might be interesting to hear what either of the three have to say. But we can’t say that we like the thought of any of these twits getting rich when Caylee is now gone. What do you think?

We say: ASK THE HARD QUESTIONS!