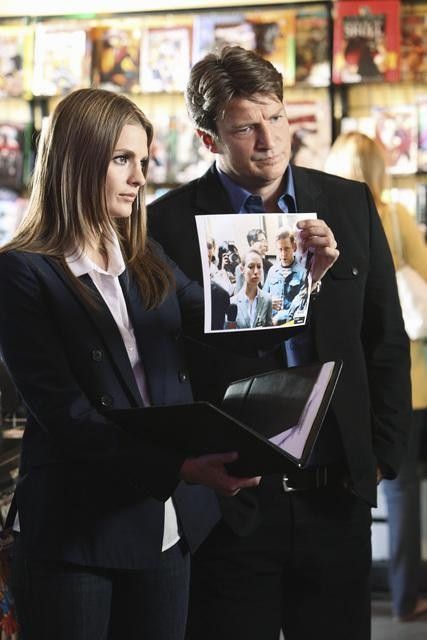 Last week Castle returned with the 4th season of the popular show.  Tonight is episode 2 called ‘Heroes & Villains.’   If you missed last week’s show you can read !   We’re still left wondering why Kate lied to Rick about remembering what happened on the day of the shooting?  I am certain we will have more answers tonight!

Official synopsis: “Heroes & Villains” – When an ex-con is mysteriously slain in an alley, Castle and Beckett believe a vigilante is behind the murder. But efforts to identify their suspect are thwarted when they discover that he roams the city in a Superhero costume — and may indeed be a Superhero. Can they capture and unmask the killer before he strikes again?

Official recap:  The show opens as a mystery man stops a rape in progress and slices off the guy’s hand. Rick is talking to his mother and Alexis is saying that she’s leaving for Stanford in January. Rick is talking to Kate about him not being ready for his daughter to leave for college.

Apparently the guy was split down the middle with that sword. After taking off the guy’s hand, he sliced him in two. The girl he was raping talked to the police and said that she didn’t get to see the killer’s face. Is she hiding the identity of the killer because he saved her life?

The victim’s mother doesn’t seem fazed by her son’s murder. She said her son, Tyler was a no good loser. He was a criminal dirt bag with a long rap sheet. Rick and Kate are talking to Tony the Butcher, and he fired Tyler. He didn’t know that Tyler was dead. He said it was a nutjob vigilante who attacked him before. The killer cut him on the butt with his sword. His warehouse has cameras and they’ve got him on video. They are all watching the video and it shows that the killer is a super hero.

To read the continuation of the recap