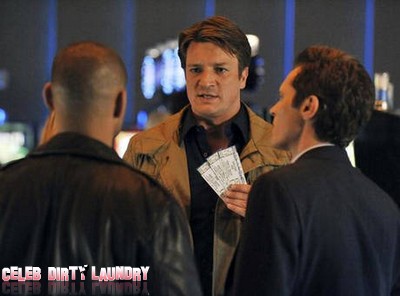 The eighth episode of Castle is called ‘Heartbreak Hotel’ and I am so excited to see it.  Last week on the show a crew of bank robbers disguised as classic television doctors took some hostages which included Castle and Martha.  Thing got complicated by the fact that Beckett’s who was on the outside was having her every move scrutinized by a hostage negotiator.  If you missed the episode you can rad the official recap here!

Official synopsis:  “During the investigation of the murder of an Atlantic City casino owner at an abandoned warehouse, strong leads emerge for the team in both New York and Atlantic City. As Beckett and Capt. Gates work the New York leads together, Castle naturally chooses to join the detectives for the road trip to ‘America’s Playground,’ hoping to help solve the case while throwing an impromptu bachelor party for Ryan. Richard Burgi (Desperate Housewives) guest stars as Charlie Turner, the slick business partner of the victim, on Castle.”

A casino boss gunned down takes Castle out of town and he has to know when to hold them and when to fold them.   It is going to take three of a kind and a wild card to beat the house.   Take a look at the sneak peek video below and let us know what you think?  Are you enjoying this season as much as I am?  Sound out in the comments below!