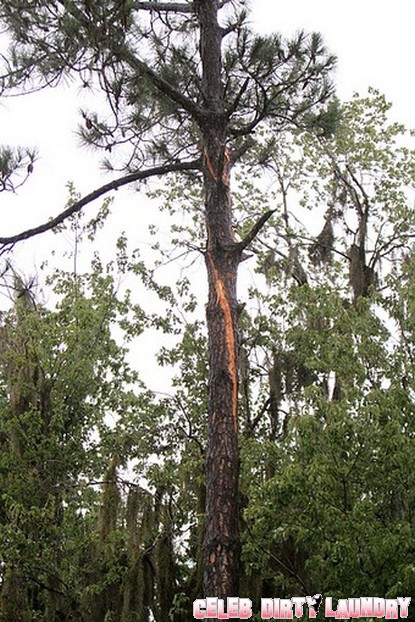 Casey Anthony was tried for the past three years on charges of first degree murder, aggravated manslaughter and aggravated child abuse, but on Tuesday, July 5, 2011, a Florida jury acquitted her of all of those charges. She was subsequently found guilty of four counts of providing false information to police officers and was sentenced to a year for each charge.

Now if you were wondering if there was some sort of cosmic sign to let the jurors know that a higher power was not impressed with their decision making abilities, then this might just be it.

The same day that the decision was handed down, a tall pine tree where little Caylee’s remains were found in 2008 was struck by lightning. Is it a sign from God??

A resident of Orlando, Florida commented, “It could be a sign from the angels that they aren’t happy with what’s happened. It’s a sad day for Orlando, for Caylee and for justice. The rain, the lightning, the storm – it’s the heavens indicating they aren’t happy.”

After her remains were found, the vacant lot on Suburban Drive served as a memorial for Caylee, with teddy bears and flowers.

Do you think someone is trying to tell us something? Or is it just a strange coincidence?