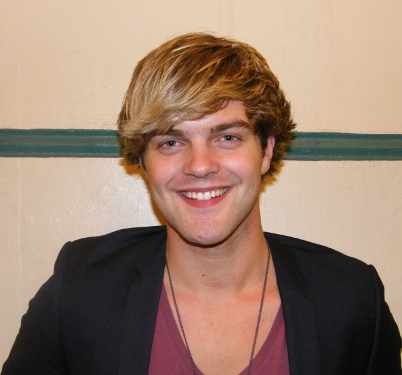 CDL has been getting some major Australian celeb action as of late and, well, we just feel downright lucky to have the privilege to converse with such awesome talent. Recently, we had the pleasure of chatting with Harry Cook, a twenty-year-old actor who most will recognize from the 2009 dark comedic drama Accidents Happen, in which he starred alongside Geena Davis.

Soon after his breakout role in Accidents Happen, Harry landed his next big lead role in the thriller Caught Inside, which was shot in the exotic Maldives and tells the tale of a group of surfers as they endure the psychopathic violence of their helmsman.

Harry was delightful to interview and, as you’ll see, he provided us with some very eloquent answers to some–in my opinion–fairly tough questions. Please take a glance at the following interview and make sure to keep Mr. Harry Cook on your Celeb Radars–because this mate has got some killer acting chops and a bright future ahead of him. Once you’re finished reading, don’t forget to follow him on Twitter @HarryCook. Drop him a quick hello. I bet if you tell him you read his interview on CDL he’ll give you a personal tweet back!

CDL: Many young people dream of becoming actors and seeing their face upon the screen. Did you always have that desire to act? What advice might you give to other young actors who wish to follow a similar path?

COOK: Yeah, when I was younger I always wanted to do it. I got taken to see lots of theatre when I was a kid with my family and was definitely certain that I wanted to be a part of it. I think the best advice to anyone trying to get into it is: if you’re heart is in it 150% and it’s what you want to do with your life then don’t ever stop doing it. Don’t ever stop trying. A lot of people are told to ‘Have a backup plan’ in case the acting-thing doesn’t work out. I don’t think having a back-up is a good thing. If acting is the only option you have, you will do anything and everything to make it happen. Just keep working hard at it.

Well phrased, mate. Fantastic advice for all those dreamers out there.

Before I continue on, I must ask: Who or what is your greatest muse? Does he/she/it have a name? Sometimes artists find their inspiration in a person they’ve idolized their entire life, absorbing their experiences and somehow applying that knowledge to their own journey. Then there are the people who draw creative energy whilst undergoing elaborate talks with their goldfish (I haven’t yet found a celeb who undergoes this practice–but I won’t stop asking this question until I do. I assure you, they’re out there, people. I have faith).  As always, I digress (happens frequently). On a serious note . . . who have you looked up to as a young, growing, eager actor?

I think that I’ve been inspired by all sorts of people. I think [from] an acting-perspective, Meryl Streep is a genius. I’ve [admired] her forever; the same goes for Dustin Hoffman. They just really know what they’re doing and do it well. I haven’t ever had long chats with my goldfish though. I had a Siamese fighting fish up until about 3 days ago. It lived a long healthy life of two weeks. Not that impressive really–haha. I’ve always looked up to Leo Dicaprio as well. He’s great.

I just don’t understand why people don’t talk to their goldfishies more?

Can you tell us a little bit about any of your upcoming roles? Which ones are you most excited about? Which ones terrify you?  What types of scripts do you have sprawled out on your coffee table at home–and are there any you just can’t wait to audition for?

I’ve got a few things in the pipeline but nothing confirmed just yet. I really want to do a comedy movie next. Or something really funny. I’ve got a few scripts at home and I did a screen test today for a new TV Show, which would be awesome to do. There are a few movies coming up that I am going to battle for as well haha. I just love working on anything that really grabs me when I read it.

Your credits include a fairly diverse group of films, including Accidents Happen starring Geena Davis, and your upcoming film Caught Inside, which is about a group of mates (say that in an Australian accent, please) who wind up on a boat with a psycho at the helm. How is working on a more down-to-earth piece about a dysfunctional family different–if at all–than working on one that is more thriller-based, adrenaline pumping? Do you prepare differently for different types of roles?

Well maaaate (said in the aussiest of accents), I think I prepare for each role sort of the same. It all comes from the same place. I like finding something about the character that I can understand and then running with it from there. I prepared for Accidents Happen by work-shopping with the rest of the cast and by finding out exactly why my character behaved the way he did. In Caught Inside I play [a character] polar-opposite to [the one I played] in Accidents Happen. I found the character for Caught Inside by [getting to better understand] surf-culture and allowing myself to become the character that way. It’s a lifestyle and a real mellow way of living. It’s cool.

While on the topic of how you prepare for roles, do you have any intriguing/awkward/weird pre-game rituals the world should know about, just in case they stumble across you while working on a set?

Haha not really. I take a few deep breaths and just go for it. I used to have a sort of pre-audition ritual when I was starting out though! I used to cut a little bit of my hair just before I went into the audition. I stopped doing it though because my hair became un-even and because it’s kind of weird.

Not weird. Every time I write an article on one of you crazy (well, you’re not crazy) celebs, I wiggle my toes back and forth ten times. Now that’s strange, huh?

Tough question: Movies or Theatre? I know you’ve done both, which do you prefer?

That is a tough one. I love theatre because it’s a real adrenaline rush performing live in front of people, but I prefer film actually. With theatre, [the piece] is finished when the curtains draw closed. Your work is done. But a film . . . that lasts forever. I think that’s kind of cool.

I agree. Every artist longs to be immortalized through their art.

What is the biggest hurdle/struggle you’ve faced as an actor so far? How has that shaped you and your attitude toward the professional landscape you find yourself in day-to-day?

Probably developing a thick skin and not taking things too seriously. I think you lose a lot of yourself being an actor because you give so much of yourself to a performance and to each character. You really expose yourself every time you perform, so I think staying sane and not letting much bother me is what I try for. Especially when there’s a certain role I really want. I just have to sort of think that whatever is meant to be will happen.

I’d like to know your favorite Skittle color. You’d be surprised how much I can tell from a celeb’s fave Skittle flavor. I might just be able to reveal your entire future in this crazy Celeb World of ours. . .Think of me as a modern day Nostradamus. I’m that good.

You have like some hardcore passion all the way, mate. You have a bright future ahead of you. Just don’t bite off more than you can chew, and remember to stay grounded! The fact that you mentioned green first means that you’re a logical person as well, which is a trait that all celebs require.  Perhaps if you see my pal Lindsay Lohan you could give her a tiny piece of your logic and reasoning? [She goes back to court for a review soon . . . I am fearing for her future L]

See, again, I digress. But now you know who to come to if you’re ever questioning your future in the Celeb World, right? Now, let’s get ourselves back on track. While on the topic of future, what do you hope to accomplish five, ten, fifteen years down the road? Where do you hope to be as an actor, as an individual, as a well-rounded artist?

All I hope is that I can keep doing what I’m doing. I love acting and performing and as long as I’m doing that I’ll be happy.

Do you surf? Sorry, have to ask. Are you like a pro?

I dabble. Haha. I mean I do surf, but not really “pro”. I wasn’t really equipped for Maldives waves when we shot Caught Inside Haha.

Who do you dream of working on a movie with? And if you ever met them on set, what would you say to them–in an ideal world, where nerves didn’t exist? Because, let’s be honest, I don’t think there has been anyone on the face of this planet who formed perfectly coherent sentences when graced by the presence of their idol.

Definitely Meryl Streep. She is acting royalty haha! I have no idea what I’d say to her though. Probably something incredibly stupid and embarrass myself haha.

Geena Davis gave you an engraved dog tag! What does it say, and do you have it displayed in a glass case somewhere?

Yeah! She is so sweet. It’s not in a glass case haha. Just in my bedroom. It says “Accidents Happen x love Geena.”

After we interviewed I looked on Geena’s IMDB page and it says that you remind her a lot of one of her boys, so she inevitably developed a personal bond with you. . . Maybe she could be like your acting-land feaux mom?

I really like salad (I know, I’m weird). And pizza. I love pizza.

I love How I Met Your Mother.

What’s something that people would never guess about you upon a first encounter?

I am incredibly clumsy. This seems to be a recurring answer as of late.

Significant other? (Please don’t say your career–That bores me.)

Haha. Not telling. But I will say that I’m in the first real relationship I’ve ever been in and I’m really happy. :)

Oh, so you’re going out with Kate Winslet? See how quick and easy it is for a gossip blogger to start a rumor? You’ll be on E! tonight . . . “Harry and Kate–Secret Lovers?” [Disclaimer: Harry is not going out with Kate. This is a joke HAHAHA (see?)]

All of us here at CelebDirtyLaundry (including our readers) sincerely appreciate you taking the time to chat with us. I love getting to personally connect with new celeb faces. I truly wish you the best of luck with your acting career and other artistic endeavors you might have planned for yourself! Any last burning thoughts you’d like to get off your chest? This blog is now your stage. . .

Thanks so much for your questions! I’ll be in the USA in April! Follow me on Twitter @HarryCook :)