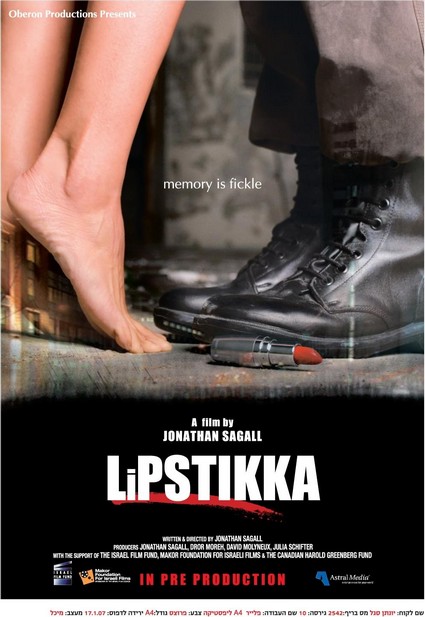 I was fortunate enough to be a part of the Monday night audience for the TIFF screening of the film Lipstikka.  The film is a psychological drama about the lives of two Palestinian women, Lara and Inam.  The story follows their friendship throughout the years from Jerusalem to London, where they meet again as adults.

The film was written and directed by filmmaker Jonathan Sagall, and I had the pleasure to sit down with him while he was in Toronto.  Now it must be said, I find it nearly impossible to write about something that I am not passionate about.  Who would?  Upon seeing the trailer for the film, I was definitely excited to see it although unsure as what to expect.  I can tell you this – I absolutely loved the film.  Jonathan created two strong female characters with such incredible depth, driven by fear and loneliness, which tie them together throughout the course of their lives.  The way in which Jonathan told the story from both women’s perspective, and how deep the history and connection that these two women shared, was very impactful.

Lara, played by Clara Khoury, and Inam, played by Nataly Attiya, did impeccable jobs bringing these characters to life.  There is a line at the end, which I asked Jonathan about that Lara says, “This isn’t the life I chose, but it’s my life so I might as well live it”.  Jonathan said it’s about letting go of our dreams and passions and doing what we can to survive and make the best of our lives.  This is all so true in the film, and also what we all deal with in our own personal lives.  I asked Jonathan if the fear and loneliness that both women faced is what drove them to their clutches (Lara, alcoholism and Inam, promiscuity) or enabled them to survive, and he said both.  It made me think a lot about who we are and what shapes us.  Is it a defining moment in time, or is the journey that we take?  I don’t think it can simply be one or the other, and Jonathan brilliantly shows us this in Lipstikka.

He has several up and coming projects under his belt; a film set to shoot in Tel Aviv and Berlin if all goes well, and a TV series about 4 friends who meet regularly discussing their lives.  Jonathan says that although Lipstikka was an attempt to delve into the political undertones going on in the world, this series will explore them further.  After watching his brilliant and thought-provoking film, I will patiently wait on the edge of my seat to see what this talented filmmaker comes out with next.