CDL Exclusive: Interview With ‘Freak Like Me’ Singer Mayra Veronica 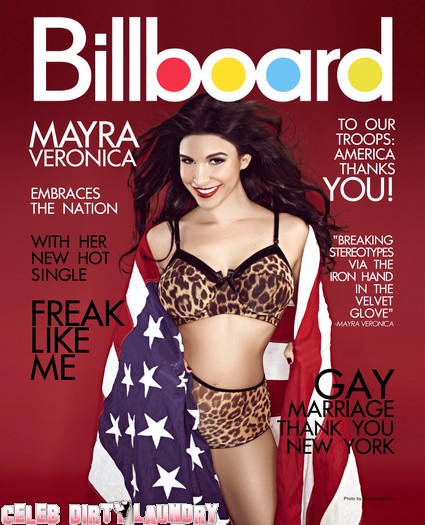 Last week, Celeb Dirty Laundry was fortunate to have the opportunity to interview musician, model and actress Mayra Veronica.  Mayra who was on the cover of Billboard earlier this summer has premiered the music video for her sexy club hit “Freak Like Me”, which co-stars Latino heartthrob Antonio Sabato, Jr.  The video was shot inside Vanity Nightclub at the Hard Rock Hotel Towers in Las Vegas.  Check out the video below and you will agree this song will be burning up the dance floors.

In our interview with Mayra we spoke about: her billboard cover, being interview by Donald Trump and what the future holds for her.

FHM has opened many doors for you since being featured in their issue in 2004? What projects have been your favorite in the past few years?

All my work with our troops worldwide has been one of my favorite projects, Ive traveled to see them in remote areas like afghanistan, Iraq, Alaska, Korea, Africa….spending time and singing to them for years now is definitely at the top of my list.

When you were promoted as a celebrity hostess and were told you were to interview Donald Trump how did you feel?

That was actually my very first interview back when I was a host, funny cause I was also in the university for a journalism course that revolved around Trump’s handling of the media…. I was in class thinking to myself, how is this happening? here we are learning about Trump and there I was interviewing him on my very first interview…. Power of the mind! lol….

You had little money to finance your schools, how did you and your parents manage to get through it?

Let’s just say I must be in Heaven since it was hell to get here….. as immigrants its a struggle….you’re starting from nothing and praying for something….at that young an age its usually just to have a roof overhead and something to eat….even if at times that roof was your car…. But I was lucky to have been blessed with a mother that knew the laws of the universe and how to apply them, always believed in her dreams and taught me to do the same, its the power of your mind that gives you everything you ever dreamed of….whatever you’re going through on your journey there is just logistics…

You were also known as a ‘gifted ballet dancer’, yet you gave it up because you were becoming voluptuous. How did you feel when you had stopped?

It was a tough call, it was my childhood dream, but I think I’ve made the Best of it ;-)

How did you come in contact with Billboard to let you cover their magazine?

My label contacted me and said we were doing a cover special for Billboard, and given that the Monday it was scheduled to release coincided with NY’s approval of gay marriage, they felt it was a perfect match, for they knew how much I supported this.

Surely you have been very busy and doing a lot of different things. Is there anything that you want to do but have not had the time for (career wise)?

Right now I can say I am doing EVERYTHING I have wanted to do for some time :-) and happily so.

Where do you see yourself in 10 years time and what does the  future hold for you?

I see myself continuing to bring fun pop tracks for the world to enjoy, and a few other surprises ;-)