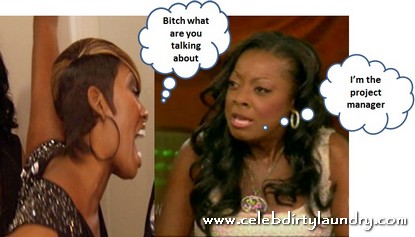 This week our Celebrity Apprentice recap is brought to use by Rosie from Fit Fab Celeb.   Take it away Rosie….  This weeks episode is titled “Bitter Suites”.   The show opens up with NeNe Leakes saying that her feelings are hurt because Lotoya said that she would basically be in contact with everyone from the show when she leaves, except for NeNe.  I swear, aren’t you tired of NeNe’s whining?

The teams meet and Donald Trump explains that this week’s task is to create a 4-page ad campaign for the Trump Hotel Collection. The winning Project Manager will receive $25,000.00 for their charity.  The PM for ASAP is Star Jones and for BackBone it is John Rich. Ivanka & Jim explain to the two teams what their concept is for Trump Hotel Collection.

ASAP: Star comes up with the concept Individual Elegance – Collective Luxury and assigns the tasks. She sends Nene and Latoya off to do errands and Nene is not happy about it because she feels it is a strategic move on Star’s part, sending her off with Laytoya that she deems to be useless. She confronts Star and tells her that she doesn’t want to work with a fake woman, referring to Latoya. Star tells Nene to just have it out with Latoya and be done with it so they can move forward with the task. Latoya tells Nene that she loves her but doesn’t like that she keeps rolling her eyes at her and gives her a hug – Nene  looks the ‘cat that swallowed the canary’ because it actually looked like Latoya was apologizing to her! Star congratulates the two of them for getting past their squabble and moving forward. Ugh. The photographer arrives and everyone else gets to work on the task. Donald Jr. arrives to see how things are going and Star, being very confident in her concept gives him a through overview. Latoya and NeNe seemed to have mended fences and getting along much better when they are alone together running the errands. The girls get back a little late and Star tells them they have five minutes to get ready for their scene and Nene loses and tells them all to ‘shut the fuck off’ because they are pissing her off. Nene is working on the scene with Hope in the bathtub and Star tries to rush her through it because time is running out for the other shoots and NeNe turns around and snaps at her to let her finish her shoot in her own time. The last shoot of the day was set up by Latoya and Star was not impressed with the table she set up. At the end, Star is really happy with the concept but Latoya is not impressed, she doesn’t feel it was thinking outside of the box. The women present their concept and the executives seem unimpressed, but Star feels that they rocked? It will be interesting to see Star go down, she won’t go quietly.

BackBone:  John’s concept is ‘Live The Life’. Eric Trump stops by for a visit and John is concerned about what they have to tell him so far. Lil’ Jon steps up and gives him a long winded, non-impressive, explanation of the concept. Lil’ Jon and John are focused and working well on the task together- Meatloaf is distracting and not contributing very much to the task, he is the Director of Photography and took a picture of a Butler that looked more like an Undertaker. Meatloaf said he didn’t want the Butler to smile and John is beside himself with the disappointing picture. John feels like they are running out of time but insists they all check the spelling for mistakes. The men are the first to present, are well prepared and do a good job. Will the fact that Meatloaf’s creative juices are running dry cause BackBone to lose in the boardroom?

On the boardroom, all the ladies tell Trump that Star did a very good job. Trump singles out NeNe and tells her that he feels she doesn’t like her team. NeNe lets loose and tells Trump that she feels a lot of the ladies are against her and kissing up Star’s ass. Trump asks John how his team did and he tells him that his whole team was a star. Trump tells everyone that the judges did not like either team, they thought both teams did not do a good job.  Eric and Donald Jr. tell the teams what the executives thought of the campaigns. Even though both teams did horrible ad campaigns, the executive felt the losers were ASAP – so by default, BackBone wins.

ASAP is left in the boardroom with Trump and Star tells him that she is surprised that they lost and he tells her that the executives preferred the men’s pitch. Donald Jr. goes on to tell ASAP that their ad was a cheezy 70’s ad. Trump asks Nene who should be fired and she doesn’t answer. He then asks Latoya and she speaks up and tells them it should be Star because she made all the decisions. He then asks Marlee and she says it should be Latoya because she has contributed less in all the tasks. Donald Jr. says Hope doesn’t contribute much as well and Marlee disagrees. The team starts to pick on Latoya and Trump reminds them that for the last two tasks the executives were most impressed with Latoya.  Star chooses Latoya and NeNe to come back in the boardroom with her to fight to stay on the job.

The ladies return to the boardroom and Trump asks Star what she is thinking. She starts talking about the great mentors in her life and lets Trump know that she considers him to be one of them. SUCK UP! Latoya tells Trump that losing the task was all Star’s fault. Trump asks NeNe who should be fired and she says Latoya because she is not strong enough to move forward with the team. Trump says that he has tremendous respect for Latoya but he does feel that the team does not want Latoya moving forward.