BY Rosie Leblanc on May 22, 2011 | Comments: one comment
Related : Celebrity Apprentice, Donald Trump 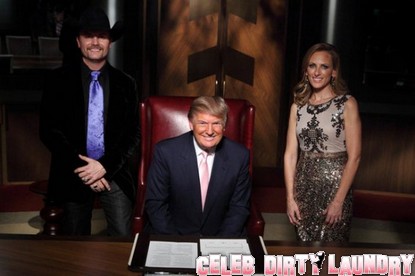 After a season of cat fights, volcanic arguments erupting and contestants walking away the 11th season of Celebrity Apprentice comes to a close tonight and Donald Trump chooses his winner.  If you missed last week’s episode head over HERE to catch up and find out how John and Marlee got to the final two!  Country singer John Rich and actress Marlee Matlin will face off for the title Sunday night with the winner earning $250,000 for his/her charity and the title of Celebrity Apprentice.

As the task continues, the finalists rush to prepare for their 7UP Retro events. One finalist’s team is frustrated by their leader’s lack of direction. The other finalist introduces Def Leppard before the band is ready to appear, creating an awkward break in their event.  The recap of tonight’s show will be brought to you by Rosie over at Fit Fab Celeb.  Take it away Rosie…

They’ve put on a unbelievable show – not it is time to see just who will be crowned The Celebrity Apprentice. Over three million dollars was raised for charity this season, it’s really big stuff and it’s not over yet. Tongiht it is winner take all, the best of the best face off for the final match; Hollywood versus Nashville.

Team Marlee is waiting for Geoffrey Holder (1970’s 7Up soft drink “uncola” advertising campaign) and they find out he has not arrived because of a contract dispute, but it is short lived and he shows up. Meanwhile, Team John is waiting for Def Leppard to arrive.  John Rich meets with the band and gets everything under control.

It’s the morning of the event and both teams are feeling the pressure. On Team Marlee, Richard is woried that there is no plan, just a pile of crap. Latoya is also worried that nothing is delgated and fears that John Rich could win it.

Team Rich get’s started early on the day of the task, everyone is helping out to get the display set. Star Jones, who classifies herself as Party Planner Extroardinaire, is getting things put together. Even though it is not a fund raising task, John Rich’s friends bring in another $25k for his charity.

Team Marlee is still all over the place but one hour till the Globetrotters arrive and Marlee finally steps up her game.

It’s the evening of the events and Team Marlee is first. Marlee opens up with an endearing and flawless speech. The 60 second commercial for their 7Up Retro pitch “Feel The Love” comes on and the crowd is floored with the appearance of Geoffrey Holder in the commercial. Then, the icing on the cake, The Globetrotters perform and the look on the crowd’s faces are priceless. Everyone appauded, everyone was happy.

Team John is getting ready to begin his pitch and he gets another cheque for a whopping $25ok for his charity. Trump is immediately not-impressed as nobody is at the door to meet him or the 7Up executives. John begins by playing the 60 second commercial for their 7Up Retro pitch “Keepin’ It Real”. Everyone is clearly impressed – but when he goes to introduce Def Leppard, nobody comes on stage. Trump is extremely dissapointed. Being the professional that he is, John Rich picks up a guitar and performs – refocusing the negative energy into 100% positive. Def Leppard performs and the crowd is clearly happy, delay or no delay.

Donald Trump meets up with the 7Up execs and both convey how much they enjoyed both performancs and will be rolling out both commercials because they were both excellent, as well, they loved both can designs so much that both will be available immediately nationwide.

Final boardroom meeting. John Rich tells Trump that he is proud of his team, his campaign is going to sell huge amounts for 7Up. Marlee follows up with saying that her team gave the whole package. Ultimately, it is Trump’s decision. Both teams get to see eachother’s marketing material – no surprise, both are critical of each others. Ivanka tells Team Marlee that she was very impressed at the welcoming feeling they gave her – then Trump adds that he was dissapointed that John Rich’s team did not greet anyone. John Rich tells Trump that he received 275k for his charity the night of task and feels that he was rattled by it which probably made him mess up the arrival time of Def Leppard. Marlee says that she could have done the same given the chance, but it wasn’t a fund raising task – yeah right… she could have went above and beyond like John Rich did, she choose not to.

Trump sends everyone out of the boardroom except Marlee and John, then we transfer to the live show.

Trump goes around the room and asks everyone who they like best, the first one that picks a winner is Star Jones, she picks John Rich. Then others pick Rich as well, but David Cassidy is the only one to pick Marlee. Before the winners are announced, Trump shows videos showcasing both charities.

John Rich and Marlee Matlin and the NY School for Deaf singing/signing a wonderful song For The Kids, Rich’s new song, a charitable tune for children everywhere whose lives are threatened by various cancers.