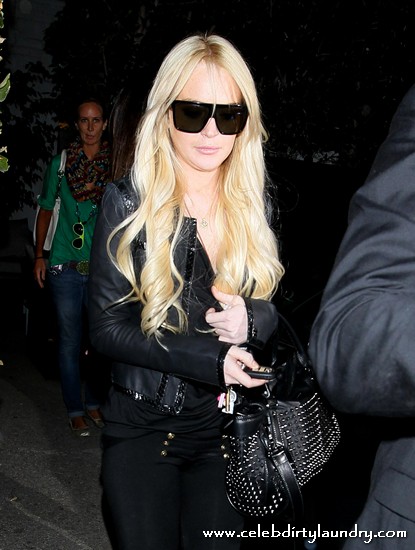 Lindsay Lohan was briefly jailed again Friday after a rollercoaster day in which a judge downgraded her jewelry theft charge, but sentenced the actress to four months behind bars for violating her probation.   Looking confused and distressed, Lohan — who was locked up for two weeks last summer — was taken immediately to jail from court after a day-long preliminary hearing on charges that she stole a $2,500 gold necklace from a store in January.

The “Mean Girls” actress was ordered to stand trial on June 3 but the jewelry charge was reduced to a misdemeanor from a more serious felony, and will cut to one year her maximum time behind bars if eventually convicted.

Los Angeles judge Stephanie Sautner, however, felt the evidence Friday suggested Lohan intended to steal the jewelry.  She therefore ruled Lohan had violated her probation for a 2007 drunk driving and cocaine possession incident, and sentenced her to 120 days jail and 480 hours community service in a morgue and womens’ prison.

Lohan’s lawyer filed an immediate appeal and Lohan’s camp scrambled to post $75,000 bail and secure her release from custody pending an appeal hearing.

She was released late Friday after about five hours, according to the Los Angles County Sheriff’s Department website.  Lohan, 24, has strenuously denied that she deliberately walked out of a Los Angeles store wearing a necklace without paying. Her lawyer Friday argued that she was distracted and absent-minded when she left with the item around her neck.

Lohan’s assistant returned it to police after news leaked that a search warrant was to be served on Lohan’s house.  “There is a lot of hoopla surrounding Ms. Lohan, but at the end of the day, relatively speaking, this is not particularly serious as grand thefts go,” Lohan’s lawyer Shawn Holley said. ”This is a necklace … that was returned 10 days later.”

But judge Sautner did not buy the defense argument. “I see the intent here and I see the level of brazenness with ’let me see what I can get away with’,” Sautner said.  “She thumbs her nose at the court, she walks into court with FU on her fingernails,” Sautner said, referring to an appearance last year by Lohan in another case.

Lohan has been in and out of rehab, jail and courtrooms multiple times since 2007. Once considered among the most promising young actresses in Hollywood, Lohan’s movie career has come to a virtual halt.

Earlier this week she secured another role in an upcoming film about New York mobster John Gotti. But it was not clear how she would fit filming around possible prolonged spells locked up in jail.