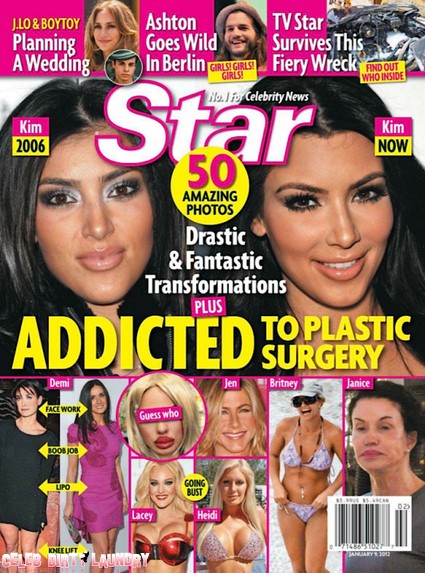 The current issue of Star Magazine features the cover story ‘Addicted To Plastic Surgery.’  The magazine has 50 amazing photos of drastic & fantastic transformations of celebs addicted to plastic surgery.  Celebs on the cover include Kim Kardashian, Demi Moore, Jennifer Aniston, Britney Spears, Janice Dickinson, Lacey Schwimmer and Heidi Montag.  So I guess they are among the celebs Star believes are addicted to plastic surgery.

The magazine claims Demi Moore has had face work, a boob job, liposuction and a knee lift.  Within the magazine are before and after shots of celebs who have had plastic surgery and believe me some of the pictures are really scary.

Also included in this week’s magazine the magazine has all the details on how since splitting from Demi Moore, Ashton Kutcher,33, has wasted no time and has gone wild in Berlin.  A source told the magazine, “He was definitely in a flirty mood.  He was surrounded by women all night long.”

Also featured Star claims that Jennifer Lopez is planning a wedding with her toyboy Casper Smart.  J-LO’s New Years resolution is out with the old and in with the new.  She is currently cruising around in her yacht with Casper and her twins so you never know.  What do you think, is Jennifer ready to take the plunge again?

To find out all this and to see the before after pictures of celebs and their transformations, pick up the current issue of Star magazine on stands now.