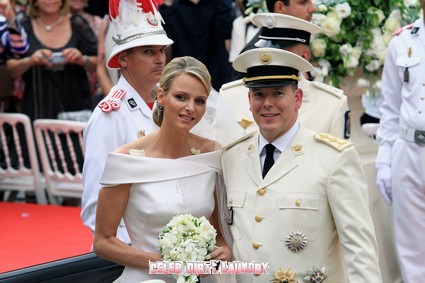 Reports in French newspapers over the weekend included Charlene Wittstock trying to physically escape her engagement and Monaco three different times. Once, she even made it to the South African embassy in Paris. The last “escape” attempt involved palace officials confiscating her passport just days before the wedding was supposed to go through.

A possible cause for this unhappy drama is that Prince Albert likely fathered yet another child, this one while he was technically “with” Charlene. The palace official claimed that Charlene’s first “royal duty” was going to be standing by her new husband’s side for the paternity test on her honeymoon. Can you believe it?

There are now new reports that Albert is doing everything he can to ensure that Charlene doesn’t try to do a runner on the marriage – suffice to say, their honeymoon isn’t going well. Basically, Albert seems to be telling her that if she just provides him with a legal heir, after that, she can do whatever she wants.

The video of Charlene sobbing during the wedding seems to sum up the state of affairs very well.

Many people criticized Albert for looking callous by not being more affectionate or concerned for his new bride. Charlene finds herself in a remarkably similar position Lady Diana. Hopefully Charlene will have a luckier outcome.