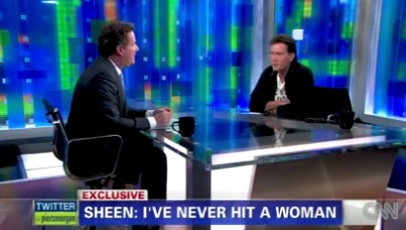 Charlie Sheen had a wild media splurge – a day he described as “tsunami of media” which included a chat with CNN host Piers Morgan about past accusations of domestic violence and a call he received from Mel Gibson.

“Those are two incidents where the scoreboard doesn’t lie,” the Platoon star responded. “The Aspen thing was thrown out. The judge was like, get this guy out of my county, he brings too much press with him.”  “And then the police report in New York just didn’t reflect anything,” Charlie said. “Those are the guys that have got to report the facts. Their jobs are on the line. So I just offer people those, you know.”

Piers then asked Charlie straight out, “Have you ever hit a woman?”  “I have not, no,” Charlie responded. “No, women are not to be hit.  They’re to be hugged and caressed, you know?”  “I’m sorry, there was an incident years ago, and everybody thought I hit her,” Charlie said. “I was trying to contain her.  I had her arms and we both went to the ground… her initials are B.A.

“I’ll give you that much – I don’t want to make the whole thing about her,” he said.  “And I felt terrible.  I delivered her to the plastic surgeon and tried to like –  and everybody said you hit her and I was like, no, she hit her thing.  Whatever, it’s over.  I felt bad about that one.”  “I never really told the story about that because everybody was under a gag order or something,” Charlie said.  “There were heinous things that led up to it that I was trying to fend off.  Whatever.  I’ll own it.”

Charlie told Piers one of his infamous party nights came as a result of drinking too much vodka to quell pains from a hernia he’d suffered, “and then just kind of was that final push, that final drop down the falls.”

Charlie revealed that he’d received a call from another Hollywood star who has had more than his share of media focus: Mel Gibson.

“He was just, you know, not calling for any advice, just like thought you might like to hear a friendly voice,” Charlie said. “He was a stone cold dude. I was really impressed”