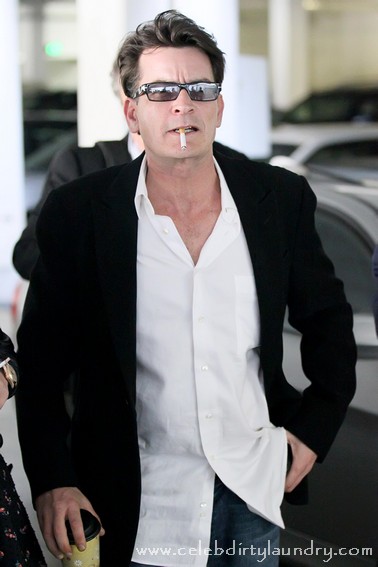 Charlie Sheen is attempting to trademark 22 of his own catch phrases, including the phrases ‘Tiger Blood’ and ‘Duh, Winning’, reports CBS News.  Charlie, who is currently on a tour of the U.S. and Canada, is seeking trademark protection for everything from drinks to electronic games.

Since it was Charlie who popularized these and other phrases he wants to be sure to capture some of the benefits if they are used commercially.

The 45-year-old Charlie has teamed up with the company ‘Hyro-gliff’ in an attempt to win rights to the bizarre catchphrases and records show that the organisation filed trademark applications between March 19th and March 22nd.  Most of the phrases have been commonplace in Sheen’s YouTube rants over the past few months and some are being used on memorabilia sold at his shows.  As well as ‘Tiger Blood’ and ‘Duh, Winning’, Sheen is also seeking to trademark ‘Vatican Assassin’ and ‘Rock Star From Mars’ as well as the nickname for his home ‘Sober Valley Lodge’ and his girlfriend’s ‘Sheen’s Goddesses’.  The actor’s spokesman says any potential uses of the phrases will be determined later but if the trademarks are granted they will protect against use on electronic games, candy, food and even gambling machines.

After coming in for heavy criticism for his first live show in Detroit, Charlie Sheen has received consecutive standing ovations following performances in Chicago and Cleveland.  He is now preparing to play the historic Radio City Music Hall in New York City.

One question for the trademark gurus – what about the 7-gram rock?