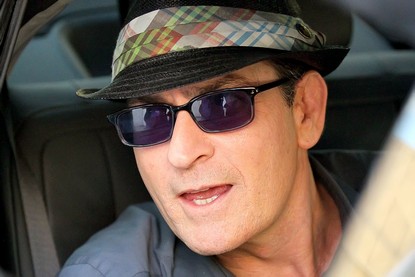 Two And A Half Men actor Charlie Sheen was hospitalized this morning after throwing a wild party last night!

Charlie was taken via ambulance to Cedars-Sinai Hospital in L.A., after throwing a wild bash last night. Two women were said to be leaving his residence as the ambulance pulled in to take him by stretcher to the hospital. His condition is said to be serious.

According to TMZ, he was suffering from some severe abdominal pains, which caused someone at his home to call 911. Charlie is joined at the hospital by his father, Martin Sheen, his mother, Janet Templeton and his ex-wife, Denise Richards.

UPDATE: Charlie’s medical emergency will not immediately affect production … “Two and a Half Men” is on hiatus this week.

We hope he’s okay, but he should really lay off of the partying and give his body the rest that it needs. Time to recuperate, Charlie! Take time to get yourself well already.

Is it time for Charlie to go to rehab? Is this the wake-up call that he needs?