Charlie Sheen Not Winning Anymore – As His First Show Bombs 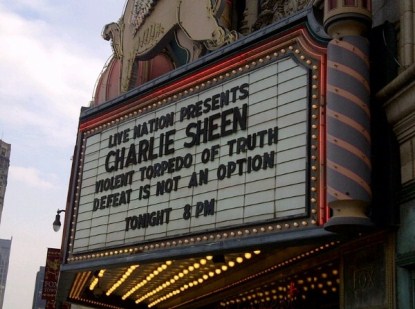 Charlie Sheen’s first show on his  “My Violent Torpedo of Truth/Defeat is Not an Option” was in Detroit April 2nd, 2011.    The question on many people’s minds was could Charlie and all his craziness pull it off.   Charlie was sure it would and even tweeted earlier in the day   “#TruthTorpedo The moment of truth is upon us Detroit!! Do not fear…the Sheenius is here!”    Too bad his over confidence did not help.   The first show on his tour was a BOMB with chants of “refund” heard in the crowd.  The show was so bad that people booed and even walked out of the show.  Charlie himself did not even last one hour.

According to multiple people inside the Fox Theatre … the majority of the audience heckled not only Charlie, but his buddy Simon Rex, who came out and started rapping.

But then the crowd got ugly.  We’re told Charlie called on Simon Rex for backup … sending him on stage to rap — and when that backfired they played the new track, “Winning” … which Snoop Dogg recorded for Charlie.

Snoop Dogg was not there because he was at the 2011 Kids Choice Awards and I am sure he is happy he got to miss the trainwreck.  So it looks like Charlie doesn’t really have a show put together at all.  Even thought Charlie refers to himself as a warlock it seems like it’s Chuck Lorre the powerful witch craft here.   Perhaps Chuck put a whammy on Charlie.  The Warlock has fallen off his broom can he dust himself off and come back?   It won’t take long for us to find out.  Were you at Charlie Sheen’s first show.  Celeb Dirty Laundry wants to know what you thought of it?