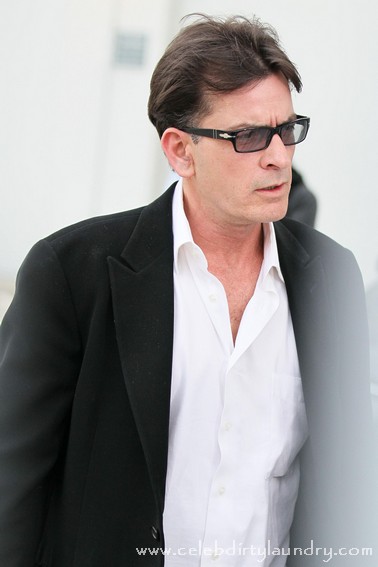 Charlie Sheen – the self-described “media tsunami” – continued on Southern California’s K-EARTH 101 Wednesday with another no-holds-barred interview as the actor spoke while running on the treadmill at his Sherman Oaks home, i.e. the “Sober Valley Lodge.”

In the interview Wednesday, the fired ‘Two And A Half Men’ star talked about his possible replacements on the show; claimed his ex-co-star Jon Cryer can’t remember his lines; challenged Celebrity Rehab’s Dr. Drew Pinsky to a boxing match; and admitted he’s more interested in transitioning his career back onto the silver screen.

Sheen said of the endless parade of experts speculating on his condition in the media: “I have to scoff at their silliness … they never met the man.”  Asked about his firing Monday, Sheen said the CBS executives “have been pining for this for a long time,” admitting he doesn’t “have a lot of facts about why they made their decision.”

Sheen said, “They’re talking to Rob [Lowe about filing Sheen’s void on the show] … I hope he does it, and kicks some ass, cause I still get [paid]!”

Sheen said he’s unfazed by parodies, such as the one this past week on Saturday Night Live, because “those are all warm hugs … an homage … if it’s done tastefully, it’s totally [good.]”  Sheen issued a “half-apology” about inflammatory comments he made about his co-star Jon Cryer, calling him a troll.  “I’ll apologize to Jon Cryer right now … I was in a mood, and I threw that out there …  it’s a half apology — it’s an apol!”

Sheen said he’s got hard feelings for Cryer because he hasn’t received any “text of call or anything or something” from his co-star since the split from the show.   That said, he’s not angry at all of his co-stars, as he called co-star Angus T. Jones “a beautiful young man,” and confirmed that both the child star and his parents have reached out to him since the split.

He also gave a “big shout out to the lovely and talented” Marin Hinkle, claiming Lorre could never pronounce her name properly.   “Her name is Marin, you turd!” Sheen said.

Asked about the rumors he’s gonna accompany pal Sean Penn to Haiti to aid in the country’s ongoing relief efforts, Sheen said they’re “100 percent true,” though he’s not sure when he’ll be going there.  Sheen said when he arrives in Haiti, he’s willing to do “whatever is asked of me, whatever I can do to deliver a little faith [and] put a smile on a few faces.”

When asked if he was excited about that Penn’s rumored love interest, actress Scarlett Johansson, was going to be in Haiti as well, Sheen joked, “Scarlett’s coming on the trip?  Rally the goddesses!” adding he  thinks the actress is “brilliant and beautiful.”

Asked what advice he has for the actors who are rumored to be taking his spot on Two And A Half Men (reportedly Lowe and Full House hunk John Stamos), Sheen implied no one will be able to fill his shoes on the show, which made him TV’s highest-paid actor ever.

“I’m sure they could [take my spot] … I would recommend they consider making it their own: Don’t look at the 177 episodes that I brilliantly did!  Things stayed juicy when Sheen was asked about a reported reel CBS has compiled for evidence, featuring the actor not remembering his lines and in no condition to work. Sheen implied it was actually Cryer that was the weakest link in the hit comedy’s chain of stars.

“There’s a reel? Poppycock, I claim Poppycock!  Is that the best they got?  Wow, brutal, losing, sizzle, bye!
“If that’s the case, they should review the gag reel at the end of any reel — its not the gag reel, it’s ‘The Jon reel,’” Sheen said, noting that when a performer flubs a line to a scene that was otherwise perfect, it’s called “popping the bubble.”  “Jon’s a bubble popper,” Sheen said.

Sheen admitted there was one show — “the night when [retired baseball speedster] Kenny Lofton was there” — where he flubbed his first take, but compared the second take he did to “a walk-off grand slam.”
Sheen, panting from exercising, continued unloading on his perceived rivals, then saying, “I think me and [Dr. Drew] Pinsky should jump in the ring, and I can show him how unstable these fists really are.”

No doubt about it – I would pay to see Charlie shut up that creepy phony ambulance chaser, Dr Drew!  Not only is his rehab system a failure (ex. Mike Starr and Jason Davis) but his wheedling attempts to insert himself into Charlie’s substance abuse issues are truly revolting.

As for his next career move, Sheen said, “I think my days on TV might be a little bit behind me … there’s tons of opportunity [in movies,]” noting he has “geniuses” lined up to work with him.  Sheen – who quizzically remarked “I got no job, I got no dough” – denied rumors he orchestrated the whole fiasco as a high-profile exit plan.   “Even I’m not that brilliant,” he said. “You can’t factor in the ex-wives in a plan like that!”

Stay on the treadmill Charlie and off the cocaine, booze and Goddesses.