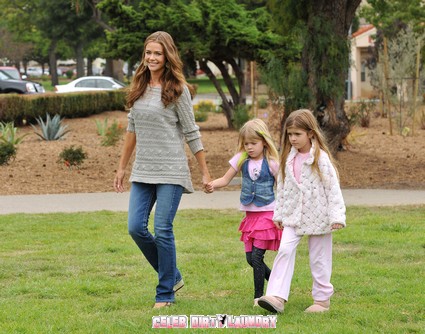 Charlie Sheen‘s ex wife Denise Richards, 40, has adopted a baby girl domestically.  Denise has two daughters, Sam, 7, and Lola, 5, from her marriage to Charlie.  Denise named her new daughter Eloise Joni after her mother who passed away in 2007. Us Magazine has the scoop from Denise’s rep:

“Eloise Joni Richards is named after Denise’s mom [Joni], and Denise and her daughters Sami and Lola chose the name Eloise.  Denise and Eloise’s big sisters couldn’t be happier and feel incredibly blessed.” Meanwhile Denise  was caught shopping with her daughter, Sam and Lola on Father’s Day.  They were seen holding hands as they left a store with bags.  I wonder if they were out shopping for a present for Charlie?