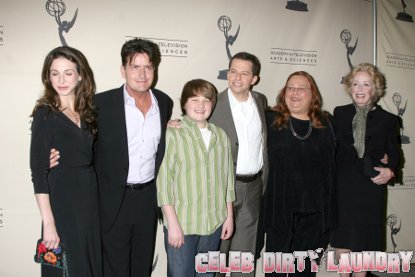 Charlie Sheen’s character from Two and a Half Men, Charlie Harper, was last seen getting on a plane destined for Paris with the show’s loveable-stalker-always-perky character, neighbor Rose.

As most of you know, the show’s producer, Chuck Lorre, has decided they will be “excising” Charlie’s character from the show and replacing him with a different character in the form of Ashton Kutcher. So how’s the exit going to go down?

While a fiery plane crash seems highly logical–and a perfectly legitimate thing to write–producer Chuck Lorre, as reported by TMZ, says he doesn’t want “to make other passengers on the flight sacrificial lambs . . . even though they don’t exist.”

However, producers have said they will most likely use “the flight” as an opportunity to write out Charlie’s character. As for how exactly, we’ll just have to wait and see.

The ironic thing about it all is that writers never intended the flight scene to serve as a cliffhanger. It just so happened that that was the last show to air before our good ol’ goofy pal Charlie Sheen had is super-duper-crazy meltdown. Funny how everything works out, huh?