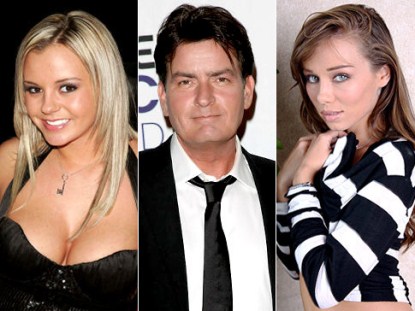 Charlie Sheen’s two ‘goddesses’ may have to agree to regular drug tests when the actor is given access to his sons again, his estranged wife Brooke Mueller is requesting.

Mueller has apparently told her lawyers she wants Sheen’s two girlfriends, Bree Olson and Natalie Kenley, to regularly be tested, and is unhappy about her 23-month-old sons Bob and Max being around the women.

Mueller’s request comes after she took a restraining order out against the actor, alleging that he had been both physically and verbally abusive towards her.  The Two And A Half Men star’s children were then taken away by police as the order states that Sheen must stay 100 yards away from Mueller and their children.   Charlie has rarely seen the boys in the past year, but took them on Saturday and refused to return them, according to Brooke.

Brooke made several other accusations against the actor in a sworn statement to a LA court, including claims he made references to having people killed and once used an anti-Semitic slur against his own manager, Mark Burg.

Brooke provided the court with a copy of a text from Sheen that read: ‘I must execute mark b like the stoopid jew pig that he is.’  The message, which appears to be a reference to his manager Mark Burg, comes days after Sheen was accused of being anti-Semitic in rant against Two and a Half Men creator Chuck Lorre.  Burg has backed Sheen, saying he didn’t believe him to be anti-Semitic.

Sheen has dismissed the claims as ‘lies’ and accuses Mueller of sending the message to herself after gaining access to his phone.  Mueller’s legal team are said to be gathering proof that she was not in the vicinity of Sheen’s phone when the message was sent on February 19.

‘[Brooke was] shooting with Paris Hilton the day that she received the anti-Semitic text message from Charlie,’ a source said.   ‘Evidence will be provided at the restraining order hearing that will be able to pinpoint the exact location of where Brooke was when she received that text.  That evidence will also prove that Brooke didn’t have possession of Charlie’s cell phone.’   ‘Brooke’s lawyer’s are going to be seeking a court order to get access to Charlie’s cell phone records as well that will be able to pinpoint where Charlie’s cell phone was when that text message was sent.’

Sheen has been fairly quiet on his Twitter page, which was set up over the weekend, but this morning suggested that his legal team are getting ready to launch their custody battle against Mueller.  He tweeted: ‘Ready for my next fastball, world? PLAN BETTER Applies to everything where an excuse now sits. Try it. U won’t be wrong. Ever.’

In the documents Mueller claims Sheen punched her, threatened to stab her in the eye and vowed to cut off her head and send it to her mother in a box.

Mueller states in the papers: ‘On Sunday February 27 at 8:45 p.m., Petitioner threatened,‘I will cut your head off, put it in a box and send it to your mom!’  ‘He said, “If you are having this conversation taped, then consider it done!”‘  ‘Last Wednesday, Petitioner threatened to stab my eye with a pen knife, and spit on my feet.  ‘He also punched me in the arm.  ‘On Saturday, Petitioner removed our children from my care in violation of our custody orders.  ‘I have asked that he return the children to me and he refuses. I am in great fear that he will find me and attack me and I am in great fear for the children’s safety while in his care.’

In addition, Mueller claims in the papers that the Two And A Half Men star bragged he’s more famous than President Barack Obama, was hatching a plan to shave the head of his ex wife Denise Richards, and called his manager Mark Berg a ‘jew pig.’  Mueller admits in the documents that she was spending increasing amounts of time with Sheen late last month and that he had offered to buy her a house in his gated Beverly Hills community to be closer to his children but Mueller states she became increasingly concerned about his sanity.

‘I am very concerned that Petitioner is currently insane,’ Mueller states in the papers.  ‘While I was residing with Petitioner and until the incident last Wednesday, Petitioner made increasingly erratic and threatening statements.  ‘One of Petitioner’s most shocking and frightening requests was that once he buys me a house I give him back $20,000 per month in cash from the child support he pays me so he could have untraceable cash to “knock off a few people” because “the people I hate violently are going to get severely punished.”‘

‘The day before we left, I woke up to Petitioner destroying belongings in the bathroom.  ‘He was in a rage because he could not find his checkbook. He then took the house phone he and chucked it from the second floor window and threw it into the pool.  ‘I did not want to anger Petitioner because I wanted a new home for the boys and I was trying my best to continue to keep Petitioner happy so that we had a better relationship for the benefit of the boys and their financial security.’

During the flight Mueller said Sheen made random, bizarre comments about his ex wife Denise Richards.  ‘On the way to the Bahamas, Petitioner was in a pretty good mood,’ Mueller states in the papers.  ‘However, he randomly told everyone on the plane that he hated his ex-wife, Denise Richards, violently and he was going to have her hair shaved off.’

According to Mueller, Sheen’s alleged violent behaviour continued during the trip.  She stated: ‘While in the Bahamas, I saw Petitioner drink alcohol.  ‘I know that there are reports that he ‘tested clean’ with an online media company, however, I personally witnessed him drinking alcohol as recently as last week.  ‘While in the Bahamas, on Wednesday, February 23, 2011, Petitioner and I had an argument which turned violent.  ‘Petitioner began following me around the house shining a flash light in my eyes so I could not see.  ‘I asked him why he was doing this to me and he yelled, ‘I’m untouchable! I’m Charlie Sheen! I’m more famous than Obama!’  ‘Randomly during his rant, he told me I was not our children’s mother – just a host for his kids.  Petitioner became increasingly furious with me and began yelling, ‘You are the most ugly person in the world! I really, really hate you!’ and he punched me in the arm.  ‘He was holding a pen knife and told me he was going to stick it in my eye.  ‘During his tirade against me, Petitioner also spit on my feet.  ‘Fortunately, I was able to immediately return to Los Angeles on Thursday, February 24, 2011.’

As per the order Sheen is not allowed to have any access to his children, or Mueller, pending the restraining order hearing on March 22.  In a live interview with NBC’s Today Show, he demanded to know the whereabouts of his sons as he spoke directly to Mueller while staring straight down the barrel of the camera.

‘Brooke I am sorry you felt his had to be done in this way,’ he said. ‘This does not display any responsible parenting that I am familiar with.’  ‘I am sure that cooler, smarter and leveler heads can prevail and I urge you to reach out to me immediately if not sooner and tell me where our sons are.’  He certainly didn’t seem to have a level head just hours earlier when he reacted to having his children removed by saying: ‘My fangs are dripping tiger blood.‘

Sheen and Mueller split in 2009 after he threatened her with a knife on Christmas Day.  She now alleges that following the fight, Sheen told her, ‘I should have killed you when I had the chance.’